No. 10 Evangels tie three-point mark in win over Pioneers 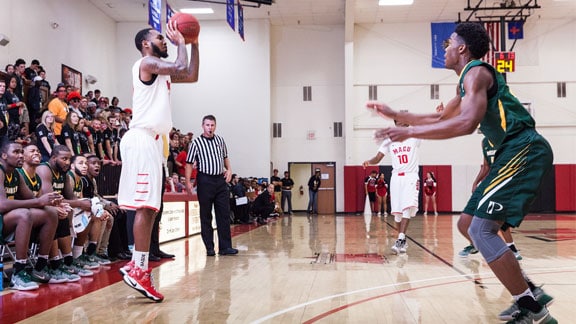 OKLAHOMA CITY – Tuesday’s victory was thrice as nice for Mid-America Christian University, as the No. 10-ranked Evangels snapped a three-game losing skid in a big way by tying the school record with 20 three-pointers in a resounding 121-87 victory over the Crowley’s Ridge College Pioneers inside the Gaulke Activity Center.

Of the 20 treys, Olajuwon Garner did the most damage, knocking down six shots from beyond the arc.

Devante Moore tied his career-best with three treys, while Trey Slate also knocked down three shots from the perimeter.

The Evangels also got a pair of threes each from Malcolm Mann. Ex’Zavia Seaton, Devonse Reed and Jordan Rhodes.

Crowley’s Ridge hung around for part of the opening half and grabbed a 27-26 lead when a trey from Chris Bernard capped an 8-0 spurt at the 10:34 mark.

That’s the point the Evangels took command, with Slate contributing eight points of a 15-0 burst that put MACU ahead 41-27.

The Pioneers would twice cut the lead to nine before the Evangels closed the half on a 16-6 run, finished off with a three by Garner as time expired to give MACU a 65-46 lead at the break.

The Evangels then put it in cruise control in the second half, as the closest the Pioneers came was on a three by Bernard that made it 67-49 with 18:43 left.

From there, Reed hit a three to ignite a 10-1 push that was capped with five straight points from Seaton that extended the lead to 27 at the 15:50 mark.

Garner then concluded the second half much like the first by nailing a three that created the final 34-point margin for the Evangels, marking their biggest lead of the game.

Slate added 13, while Seaton produced a double-double of 12 points and 12 rebounds.   Mann also scored in double-figures with 10 points along with six assists, with Keyshawn Perkins dishing out a career-high nine assists for the Evangels.

The Evangels will now turn right around and host Wayland Baptist University in a Sooner Athletic Conference tilt Thursday night (Jan. 12) at 8 pm.