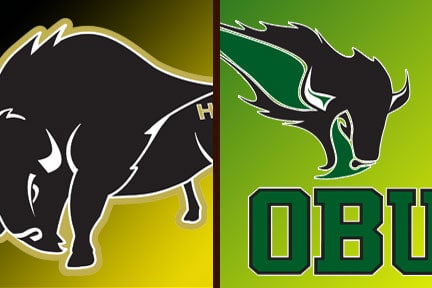 Shawnee – Oklahoma Baptist, in its NCAA football debut, stood toe-to-toe with No. 21 Harding for over 60 minutes and came out on the short end of a 20-19 overtime final Saturday at Hurt Stadium.

“Our heart was never in question in this game,” said OBU Coach Chris Jensen. “We let our competitive (nature) come out and I was very pleased with our effort and intensity. That said, we made a few mistakes and we must improve. The biggest improvement in football usually comes between weeks one and two.”

The game came down to some special teams, with big plays and tough miscues as both teams’ field goal units had their missteps. OBU blocked two kicks, Harding blocked one and both sides had trouble gathering in questionable snaps.

Harding struck first, scoring on a 10-play, 99-yard drive, including a 63-yard pass play from Park parish to Andrew Dather. Matt Tenison broke the scoreless tie with a two-yard run with 4:47 left in the first quarter.

Gage Wimer blocked a 26-yard field attempt by Harding with 6:32 left in the second quarter.

After an OBU three-and-out, Harding scored on a six-play, 48-yard drive with Parish scoring from the one. The PAT was mishandled and Tristan Parsley’s kick was a grounder into the line, but Harding had a 13-0 lead with 7:00 left in the half.

That lead stood through the remainder of the half as OBU’s Trey Tully missed just left on a 41-yard field goal try on the Bison’s best possession of the quarter.

OBU got things going on its first drive of the second half, scoring on a six-play, 53-yard possession, capped by an athletic 40-yard run by Dez Stegall. Tully missed the PAT to the left, leaving the Bison down 13-6 with 10:20 to go in the third quarter.

“Dez really just made something happen there,” Jensen said. “That was just a great, athletic play.”

The Bison defense came up with a fourth-down stop at the OBU 21 to set up the offense’s 10-play 79-yard march to tie the game.

That drive seemed dead when Stegall was getting wrestled to the ground on third and seven, but a defensive holding penalty and a personal foul moved the ball all the way to the Harding 27.

After a pair of six-yard runs by Isaiah Mallory, Stegall went up top for Derek Serowski, who sailed above his defender and came down with a one-handed touchdown grab. Tully added the kick for a 13-13 tie with 3:58 left in the third quarter.

“That was a catch we will watch again and again,” Jensen said. “It was an amazing catch that we’ve come to expect from Derek. That kind of catch is no big deal to him.

OBU continued its second half defensive dominance, with Zach Bishop blocking a field goal from 32 yards out early in the fourth quarter.

Harding started what looked like it might be the final drive of regulation, but Kimes Gilbert forced a fumble and Sha’Hada Artberry came away with the ball to set up the Bison at the Harding 45.

OBU was able to advance to the Bisons 20 before consecutive losses put the ball at the 25. Tully’s 42-yard field goal try with 10 seconds on the clock was blocked by Zalenski and the game was destined to overtime.

OBU got the ball first and scored on the second play from scrimmage as Mallory broke into the clear and then put a wicked move to the right, juking past the last defender for a 20-yard scoring run. The PAT, however, was no good and the door was open for Harding.

“The thing about Isaiah is he just runs with so much energy and he’s tough to tackle,” Jensen said.

The Bisons scored from five yards out on a Zach Shelley run and Parsley got the PAT through the uprights to spoil the upset bid.

OBU had 226 yards of offense, while surrendering 423. Mallory rushed for 64 yards on 14 carries, while Stegall had 44 yards on 11 rushes. Stegall was 13 of 15 passing with a touchdown and 72 yards. Stephan Turner caught eight passes for 557 yards with Frankie Edwards getting 26 yards on five catches. Serowski had 25 yards and the touchdown among his three receptions.

Defensively, Zack Bishop led the Bison with 11 tackles, followed by Gilbert with eight and Charles Taylor III and Levi Jennings with seven each. Taylor twice made big open field tackles from behind.

OBU returns to action next week with a road game at Arkansas Tech. Kickoff in Russellville is 6 p.m.