No. 6 Baylor survives a scare from unranked Pokes 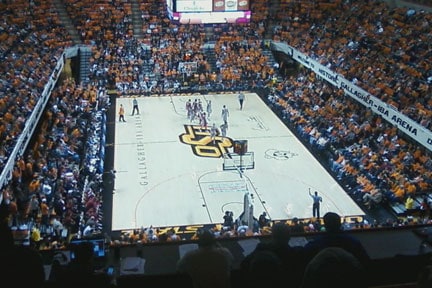 STILLWATER –  The unranked Oklahoma State Cowboys took the No. 6 Baylor Bears down to the wire in historic Gallagher-Iba Arena on Saturday afternoon.

Baylor forward Quincy Acy came off a designed play out of a timeout with a basket to give the lead back to the Bears.  After back and forth possessions, the Bears led the Cowboys 62-60 with seven seconds left.

Then Brady Heslip, a 95 percent free throw shooter, missed the second free throw of a one-and-one, and Quincy Acy grabbed his sixth offensive rebound of the game to clinch the game winning free throws for the bears. Baylor would go on to win 64-60.

This was Baylor’s first win in Gallagher Iba since the 2003 season, snapping an eight-game losing streak.

The Cowboys have already lost a number of players due to transfers and injuries going into the Baylor game. OSU faced off against Baylor without its starting center Philip Jurick due to a foot injury and backup point guard Cezar Guerrero was suspended for violating team rules.

Brian Williams, who scored a career high of 23 points and finished 9 of 15 from the field, gave the Cowboys a scoring spark they needed to keep up with the high-octane offense of the Bears. Senior guard Keiton Page added 15 points, but struggled from three-point range down the stretch.