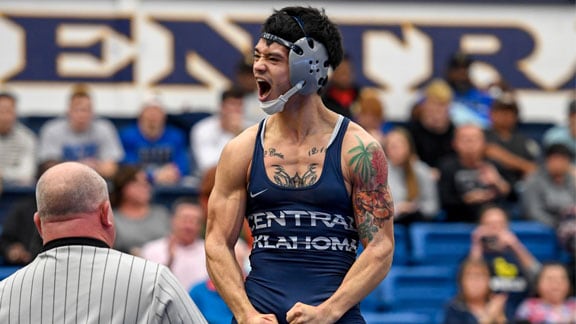 EDMOND – Central Oklahoma recorded falls in the first four matches of its dual against Oklahoma City University Wednesday night in Hamilton Field House, and rode that momentum through to a 35-12 win.

Josh Lindsey, Blake Duaphin, Joshua Ailey, and Will Steltzlen each recorded falls to open the dual Wednesday night. Bryan Dutton didn’t slow down though, as the junior won by tech. fall 19-6.

“I knew we needed to come out and set the tone early,” UCO head coach Todd Steidley said. “I’m proud of the guys early in the lineup for doing that. That really gave us a boost.”

Lindsey, ranked third in the country at 125 pounds, wasted no time getting his 10th fall of the season to start off the dual Wednesday. Going up against Mason Naifeh, Lindsey scored a quick takedown in the first minute, then pinned Naifeh at 1:02 to get an early six points.

Dauphin took a little more time to get the same result. Against Michael Sanchez at 133 pounds, Dauphin built a 6-1 first period lead with two takedowns and a nearfall. After scoring an early, second period takedown, Dauphin recorded his third pin of the season at the 3:55 mark.

Ailey would get his team-leading 12th pin of the season at 141 pounds. Against James Landoll, and with a slight 2-1 lead in the second period, Ailey pounced. The Tonkawa native scored a takedown about a minute into the period and pinned Landoll at 3:51.

At 149 pounds, Steltzlen was aggressive in replicating Lindsey’s earlier fall. Steltzlen won his 20th match of the season, his eighth fall, with a 1:05 pin.

Dutton’s tech. fall win at 157 pounds was the most active match of the night. Dutton recorded seven takedowns and a nearfall on his way to his 20th win on the season.

UCO and OCU alternated wins in the second half of the dual.

Barreras’ win is a signature win for the freshman. Though he leads the team with a 25-5 record this season, and has 10 wins by fall, Barreras doesn’t have very many wins vs. ranked opponents.

And though OCU is in the NAIA, Barreras now owns a tough, hard fought win over the third-ranked 174-pounder in the country.

Derek Sivertsen gave OCU three more points, beating Caleb Hawes 6-1 at 184 pounds, but Greg Wilson earned a decision of his own with a 3-2 win over Evan Hudson. Finally, Oklahoma City picked up one more win at heavyweight, as Korey Walker beat Kyle Factor 3-2.

The Bronchos now turn their attention to a tough slate of duals Saturday in Kearney, Neb. UCO will wrestle Western State, Chadron, and Southwest Minnesota State on Saturday morning at the Midwest Duals.

UCO’s next home match is Friday, Jan. 20 and is against fourth-ranked MIAA rival Nebraska-Kearney.