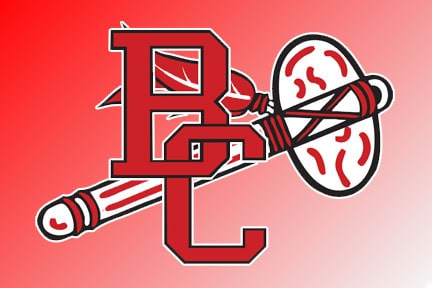 Two games.  Two senior quarterbacks.  Both Kyle Kuban and Karl Birkenfield have seen significant time and each has shown himself to be effective.

Is there a controversy in Muskogee?

Not really, according to Bacone head coach Trevor Rubly, who said that he is happy with the performance he’s seen from his team’s offense.

“It’s definitely working good,” Rubly said.  “What we’re doing (with the quarterbacks) is splitting time at the beginning and seeing who has the hot hand and who is seeing things better that day.

“So far, the first game, Kyle had a better feel for things so we went with him the rest of the game.

“And then last game, Kyle kinda got a big hit early on.  He kinda hit his head on the turf, nothing too serious, but was a little cloudy for a little bit.  So we were taking precautions and went with Karl for a little bit longer and Karl was doing a great job so we stuck it out with him.”

The passing game has been good for both quarterbacks, with the pair averaging about 200 yards per game passing and combining for five touchdown passes thrown through two games.

The running game has not gotten off to the same kind of start.  The Warriors have rushed for just 65.5 yards per game.

“The ground game hasn’t really taken off yet,” Rubly said.  “A couple of times the running backs are going the wrong way and little things like that have caused a couple of turnovers.

We’re definitely not going to just throw our hands up and forget about the run game.  We’re going to try to establish it and try to get better and better as each game comes upon us.”

The rushing attack has matched the passing games in touchdowns scored at five so far.  And Rubly said that he is making the decisions about how to approach the play calling by the opponent’s strategy on defense.

“Right now, and we’ve talked in the offseason about just taking what the defense gives us, and right now they’re trying to stop the run because we were a little more of a running team last year.

“We’re doing what we talked about all summer long about going with what the defense gives us, and taking opportunities, and right now the opportunity that’s given to us is through the air.”

But the Warriors are 1-1, with a victory in overtime and a loss in the home opener to a perennial NAIA powerhouse.  In the process, Bacone has given up 86 points in the first two contests.

“The defense is not doing too well,” Rubly said.

“Last year we were pretty sound.  We did lose three all-conference defensive guys – two defensive linemen and one linebacker. We thought we had a replacement and its showing that we don’t right now.

“Plus, I think with their absence, a couple of guys are trying to do too much, and that just doesn’t work with defense.  You just have to do your job and rely on the other 10 guys out there to do their job and be in the right place.  And we have guys that are trying to make plays that really aren’t their plays to make. And then we get burned in the process.”

Rubly and his staff have been addressing that through the week.

“We’ve been stressing it and I think we have great kids and we have a great scheme, but I just don’t think we’re buying in right now.  It’s a little bit disappointing.

“But I think that this week of practice and maybe Northwestern (Iowa) opened their eyes to that.  And hopefully we start playing a little bit more sound and a little more disciplined on defense.  And we’re going to get it fixed.  I have a firm belief in the guys that they’re going to turn it around and we’re going to be OK.”

Rubly said that he hoped his team as a whole learned something from its experience against Northwestern (Iowa) last weekend.

“They’re a top 13 team in the nation,” Rubly said.  “They’re continuing going to the playoffs year in and year out.  They’ve won two national championships.  They’re where we want to go and we’re not there yet.  So hopefully we go back to the drawing board and our kids go back to work and understand that.”

But even taking a loss against a team like the Red Raiders is not too bad, especially at this point in the season.

“I told our kids its better to lose early than to lose late.  Of course, we don’t want to lose at all, but you know, when we do lose, we have a good base now and we build on this and we get better every week.”

Bacone is at home again on Saturday, taking on a Southwestern (Texas) program that is playing football for the first time since 1953.  Rubly said that he is preparing for a tough game.

“They’re a beginning program, but they have some athletes,” Rubly said.  “Their running backs and their quarterback are really athletic.  Their offensive scheme is pretty solid.  We have our hands full again.  We do have a home game and we’re looking forward to trying to get a win and get back on the winning side of things.”

And Rubly said he feels his team is generally on the right track.

“We hope to play a little more disciplined and a little more sound defensively.  The offense just needs to keep doing what they’re doing.  They’re scoring points and they’re doing a good job.  They’re still leaving points on the field, but they are executing and scoring enough points to win, I believe.  On the defensive side, we just need to shore some things up and we’ll be OK.”

Bacone hosts Southwestern on Saturday in the Indian Bowl at 5 p.m.