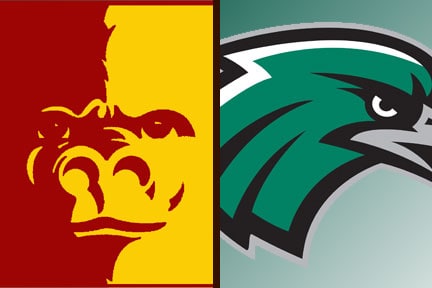 TAHLEQUAH – The Northeastern State football team dropped a 38-14 decision to No. 7 Pittsburg State in the season opener Thursday night at Doc Wadley Stadium.

Senior running back Joel Rockmore finished with 156 all-purpose yards, marking his highest total in nearly two years. He ran the ball 17 times for 92 yards and also posted his first-career receiving touchdown late in the first quarter.

The Gorillas jumped on top early when they scored on their first two offensive plays from scrimmage. Quarterback John Roderique took his opening carry 39 yards for a score and followed that up with another 36-yard scamper after an NSU 3-and-out. They added a third score at the 5:40 mark of the opening frame when Michael Rose plunged in from seven yards out.

The RiverHawks got on the board less than two minutes later when Pantastico found Rockmore streaking up the middle for 47 yards.

PSU took a 28-7 lead into halftime when Roderique found pay dirt for the third time with 3:52 remaining in the opening half.

Junior wide receiver Jamari Pope registered his first touchdown as a member of the RiverHawks on a six-yard strike from Pantastico with 3:45 left in the third quarter.

The Gorillas closed out the scoring on a 23-yard run from Rose late in the third quarter and a Chad Levin 26-yard field goal early in the fourth quarter.

Northeastern State finished the game with 381 yards of total offense, including 275 passing and 106 rushing. The team was unable to force a turnover, but the RiverHawks did register four quarterback sacks.