Not Quite a Comeback 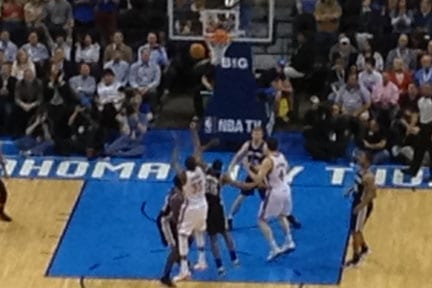 The Thunder did not get the outcome they wanted after coming back from a 27-point deficit in the second quarter, but they did manage to make the Spurs sweat a little before falling to San Antonio 114-105.  OKC pulled with two points in the final minutes of the fourth quarter, but they could not manage to grab the lead from the team that is now only three games back of the Thunder for second place in the Western Conference standings after getting the win on Friday night.

The game started off promising for the Thunder when they forced two consecutive shot clock violations on the defensive end.  They did not manage to maintain that defensive effort after those first minutes, and San Antonio jumped out to a quick lead.  It was not looking good when the Spurs got hot from long distance, shooting 47% from three-point range on the night.

Things only looked worse when the Thunder just could not seem to get their shots to fall.  For much of the first half, Russell Westbrook seemed to be carrying his team, and he went on to lead all scorers in the game with 36 points.  He was followed by Kevin Durant with 25 and James Harden with 19.  At the end of the second quarter, Coach Scott Brooks tried to shake things up by putting Lazar Hayward in the game.  The Thunder ended up making up a little ground to pull within 17, trailing 65-48.

The Thunder was slow to emerge from the locker room after the intermission.  Whatever Coach Brooks said, he seemed to have lit a fire in his team because they came out playing with much more grit and determination.  Royal Ivey had a big hand in the team’s comeback, hitting two treys and playing aggressive defense on the Spurs’ Tony Parker.  Serge Ibaka also made an impact on the game with his 12 points, 12 rebounds, and six blocks.

OKC closed the gap to 13 points by the end of the third quarter, and the fans who are famous around the NBA rose to the occasion to will their team to victory.  The Thunder quickly reduced San Antonio’s lead to single digits, but never managed to tie or take the lead.  While they did not get the win, Brooks said he was proud of his team’s effort to fight back.  Kevin Durant said it was a “moral victory,” if nothing else.

Now the Thunder have Saturday off before they face a struggling Portland team at home on Sunday night.