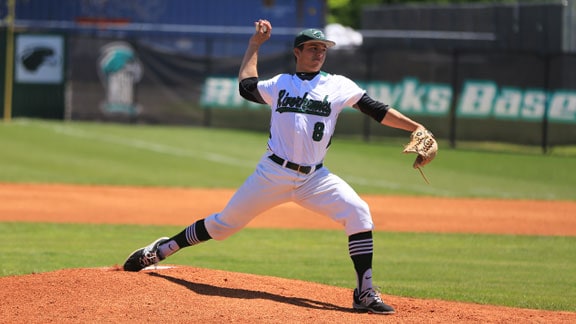 NEW YORK, N.Y. – Northeastern State’s Ryan Helsley was selected by the St. Louis Cardinals Tuesday in the fifth round of the 2015 Major League Baseball Draft.

He pitched in 26 games and made 21 starts during his two years at NSU. He compiled a 14-8 record and a 4.06 ERA in 126.1 innings pitched. He also threw three complete games and tallied 151 strikeouts. He was the lone underclassmen to earn a spot on the 2015 All-MIAA First Team, and he was also named to the 2014 All-MIAA Second Team as a freshman.

This past season, Helsley finished fifth in the nation and first in the MIAA in strikeouts per nine innings (13.4). He fanned an MIAA-best 95 batters and compiled a 3.53 ERA in 63.2 IP.

Helsley was the first player from the MIAA and the second player from the state of Oklahoma (Anthony Hermelyn, University of Oklahoma) selected in this year’s draft. He was also the fifth player in all of NCAA Division II to come off the board.

Helsley is the first Northeastern State baseball player to be selected in the MLB Draft since Joel Eusebio was picked in the 46th round by the Oakland Athletics in 2009.