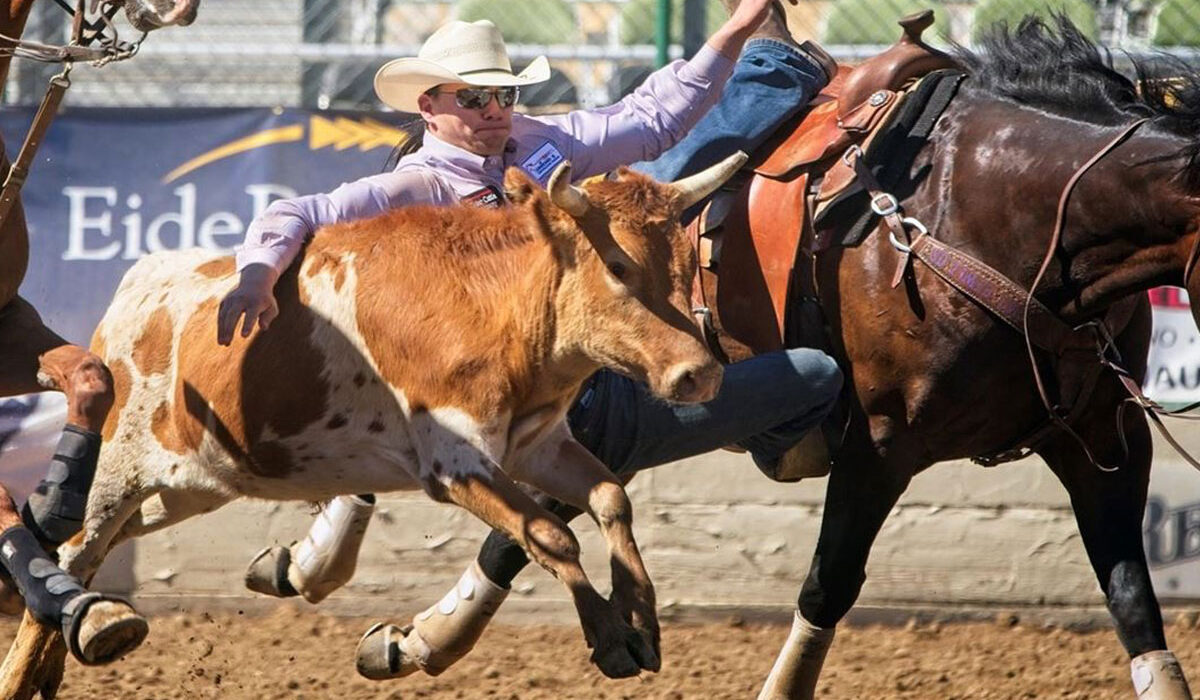 CARRINGTON, N.D. – Every step that Bridger Anderson has taken in his 22 years on Earth has led to this moment: His first qualification to the National Finals Rodeo.

From being horseback before he can even remember to winning the state championship in wrestling just a few years ago, he had a solid background and the right athleticism it takes to be one of the greatest steer wrestlers in the sport. He studied under Luke Branquinho, a five-time world champion, before attending the Bulldogging Capital of College Rodeo, better known as Northwestern Oklahoma State University in Alva.

“The one thing I was looking at coming out of high school was where can I go and get my butt kicked so I can get better,” said Anderson of Carrington, who won the inaugural Ote Berry’s Junior Steer Wrestling world championship in 2017. “I was a fairly decent steer wrestler coming out of high school. If I would have gone to a school where I would have been one of the better steer wrestlers there, I don’t feel like I’d progress nearly as fast. I looked around, but I couldn’t find anywhere that I’d get my butt kicked all the time like I do at Alva.”

His education seems to be paying off. He earned $43,877 through the on-and-off 2020 ProRodeo season. He’ll head to ProRodeo’s grand finale in 10th place – only the top 15 contestants on the money list in each event earn NFR bids. They’ll battle for the gold buckles Dec. 3-12 at Globe Life Field in Arlington, Texas, a one-year home for the NFR while Las Vegas tries to right the pandemic ship.

“Going to my first NFR and it not being in Vegas is a little bittersweet,” he said. “Watching those old NFR tapes, I’ve always thought about what I’d give to run one in Vegas. It’s been built up. I was watching the NFR before I could talk.

“When I was in Vegas (for the Jr. NFR in 2017), I got to go to the NFR. Just watching the opening ceremonies and watching the bulldogging, I was about ready to puke because I was so nervous. This being my first NFR, going to Arlington might not be too bad of an idea, because it’s not Vegas and not the pressure that goes along with Vegas.”

This is the sport’s premier championship, so there will be plenty of pressure, and he understands that. But he’s handled the pressure before. As a sophomore in June 2019, he won the intercollegiate national championship at the College National Finals Rodeo, becoming just the second Northwestern cowboy to win the coveted title – fellow bulldogger J.D. Struxness won the crown in 2016.

“When I first got to Alva, I thought, ‘There are a lot of big men around here; I’m going to have to step it up a little bit,’ ” said Anderson, who credits some of his success to his sponsors, AH Inc., DEFY, Hepper Ranch & Performing Horses, Diamond S Performance Horses, Gader Cattle Co., New Dawn Crop, Smiles for Jake and CINCH. “You just take it all in stride and just try to use it toward positive things. It was cool to see those guys throwing the crap out of steers every day. You just fall into that program.”

He got his first big break during his junior year of high school – that was the same year he finished his football and wrestling careers because he wanted to focus on bulldogging. For Christmas, his parents, Glenn and Robin Anderson, set him up with a few days of training with Branquinho.

“I spent three days with Luke, and the first day was rough; I threw up,” said Anderson, who is a senior at Northwestern and lives in Alva while competing on the ProRodeo trail. “We were running old NFR steers that were pretty large, and I was bulldogging the way that makes it quite a bit of work. It’s not quite the modern style of bulldogging, and I was getting worn out.

“After a coupe of hours, he told me a couple of things to change and how to make it easier on me and faster. He revolutionized my steer wrestling. On the third day, I didn’t want to move. I was tired and sore, but I was at Luke Branquinho’s house, so I thought, ‘I have to bare down right here because this doesn’t happen every day.’ ”

That’s nothing new for the North Dakota cowboy. He was raised around ranching and rodeo. His parents both competed in team roping, and his mother added breakaway roping to her repertoire.

Add into the genetic mix a dash of competitiveness, and the family stew has been created. He has two younger sisters, Cedar, who is 20 and is on the Northwestern rodeo team, and Dawsyn, a high school junior who just turned 17.

Sibling rivarly is one thing, but he knows who has his back when times get tough. Besides his family, he only has to look at Tyler and Jackie Schau, who have been mentors and coaches from his chute-dogging days in junior high to eventually being traveling partners during his first year of ProRodeo. They own Diamond S Performance Horses and raised Whiskers, the horse Anderson rides.

“Between the three of them, they have 11 NFR qualifications, and I was the only one that didn’t have one,” Anderson said. “Those guys are very knowledgeable about rodeo. To be around them is huge, whether you make a good run or not. You come back to the rig, and it’s time to go to the next one.”

He also got some NFR experience later in the season when his trio opted to stay close to their Oklahoma roots. Since Anderson was the only one in the group with a shot at qualifying for Arlington, he jumped in a group that included four-time NFR qualifier Jule Hazen, Northwestern alumnus Cody Devers and another 2020 NFR rookie, Jace Melvin.

“There was a month left in the season when I got in with them, and all three had a shot at making the finals,” Anderson said. “It was all or nothing. We entered everything and drove all over the country. There were a lot of emotions. It was a roller coaster. It ended up working out for Jace, Jule and me to make the finals, and Devers came up just short.”

Once in Arlington, he will enlist the help of three athletes he trusts: Graves will be his hazer while riding Kody Woodward’s hazing horse, and Anderson will ride Whiskers. They combined for some big wins in a short time.

“My professional career has been on this horse, and he’s got a laundry list of accomplishments,” Anderson said. “If he knows there’s a racehorse beside him, he likes running. It’s nice when you have a good haze horse beside you, because he’ll get after it.

“He’s a little cocky and knows what he is, but I get along with him well.”

The proof has been there all season long, and now he gets to showcase it in front of rodeo’s biggest fans in north Texas.