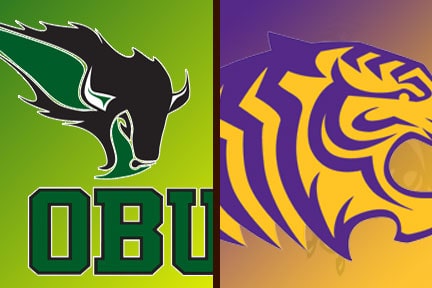 ARKADELPHIA, Ark. – The first renewal of the battle of OBUs since 1940 went to the Ouachita Baptist Tigers in a 31-20 win over the Bison of Oklahoma Baptist Saturday.

“We felt like the team with the best rushing stats at the end of the game would win it.,” said Bison Coach Chris Jensen of the ground-game oriented offenses of both teams on a rain-drenched field.

“I was proud of our guys for holding on to the ball. The field was really soggy today,” Jensen said.

The Bison found themselves down 21-0 in the second quarter after Ouachita Baptist got Austin Warford touchdown passes of 51 yards to Kris Oliver and 5 yards to John Powell to go along with a quarterback keeper for 16 yards.

Oklahoma Baptist got on the scoreboard on a 42 yard sweep by Frankie Edwards and the Bison pulled to within 21-6 with 9:32 left in the second quarter.

The Tigers drove the ball down the field but the Bison held tough on a fourth and one and got the ball back at their own 31.

Isaiah Mallory ran twice for 15 yards and Jacob Ellis added an 11-yard run to help move the ball to the Ouachita 25. Dez Stegall ran for 11 yards on a third and nine to the 13.

Blake Woodard passed to Alex Lewis two plays later for a nine-yard TD pass and Trey Tully added the PAT kick to make it 21-13 with 16 seconds left in the half.

Ouachita scored on their first drive of the second half with Oliver running 19 yards for a 28-13 lead with 6:49 left in the third quarter. Oliver finished the game with 193 yards rushing.

Josh Pettijohn returned the kickoff 42 yards to the 45 to set up a scoring drive by the Bison.

Woodard kept the drive alive with a nine-yard run on third and eight but was forced out of the game with an ankle injury. Mallory set the Bison up with a first down at the one after a 12-yard gain and finished off the drive on fourth down from the one on a touchdown run off the right side.

Tully added his second 35-yard PAT of the game after a Bison penalty to make it 28-20 with 45 seconds left in the third quarter.

“What a gutsy performance by Blake Woodard,” Jensen said. “I’m proud of the way he played today after waiting for his chance this season.”

Mallory led the Bison with 68 yards rushing. Stegall passed for 52 yards and Woodard threw for 65.

The Bison return home next week for the final time, hosting Henderson State for Homecoming at 1 p.m. at Crain Family Stadium.