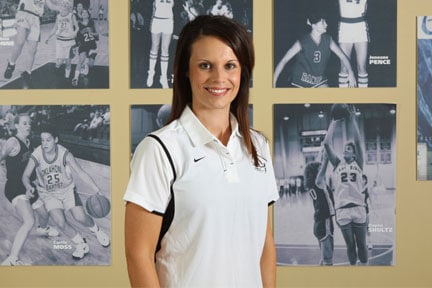 Oklahoma Baptist removed the ‘interim’ tag from Casi Bays’ title, officially naming her the head coach of the team she began coaching this fall.

Bays had served as the team’s assistant coach prior to moving to the interim position and was named head coach Tuesday night.

“Casi has handled the typical turbulence of a coaching change very well,” said OBU Athletic Director Robert Davenport. “We’re very pleased to have someone who knows and cares about the program in this position.”

Bays has taken the team to a 12-10 record through the first 22 games, including a win Thursday as her first contest as the official head coach.

“This is one of my dream jobs,” Bays said. “I’m thankful to Robert Davenport, President Whitlock and Dr. Norman for giving me this chance.”

The move has already had an impact.

“A lot of recruits have been asking if I was going to be here because they said they wanted me to be the coach,” Bays said. “We just got a commitment from a girl who was deciding between us and Oral Roberts.”

Bays said she would be recruiting to an up-tempo style with the goal of returning the program to its place in the NAIA elite.

“We definitely want to get OBU back to where it is supposed to be,” Bays said. “We were always competitive and always nationally ranked. We haven’t been there the past couple of years.”