OBU staff and volunteers made Saturday’s experience a good one 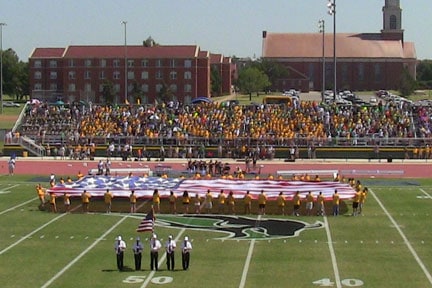 Years in the making, Saturday’s football game at Oklahoma Baptist was an overall event that encompassed more than just the contest itself.

Yes, the day was about the game.  But there’s so much that goes into putting together an event of such magnitude, with the historic precedent on the minds of so many, that it is worth mentioning that it came across as a success.

OBU Sports Information Director Ray Fink has been a part of the planning of Saturday’s game and all that went into it and said that many people felt its significance.

“For the athletic department, it was a really big day,” Fink said.  “It means a lot.”

All hands at OBU were on deck for the game and some from other decks as well.  The call went out for volunteers more than a month ago to make the final push toward getting together everything it would to make it an experience for the university and beyond and more than just two teams getting together on a late August afternoon.

Fink praised the efforts of those who were there and undertook the production.

“We didn’t get quite as many volunteers as we needed, but we did get a lot.  Labor Day Weekend hit us pretty hard.  But we learned what we need and what we don’t need from this event.  And we’ll get better every week at this.”

In most areas, like parking and concession and retail sales to scoreboard operation and most athletic related activities, things seemed to go very smoothly.  Of course, often only those “in the know” recognize the things that keep the blood pressure high.

“Behind the scenes, if it could go wrong, it went wrong,” Fink said.  “Other than that, it was a good day.”

But in the forefront, what was seen to take place didn’t go wrong.  It went well.

Heat.  Oh yeah, there was that factor, too.

Temperature reports varied from 102 to 105 degrees with heat index measurements of 114-117.  Even in the shade, there was little comfort.

It seems a little strange then that a game like this, which was scheduled for the final day in August in central Oklahoma might have a later start time.  Until one factor comes to mind.

Bison Field at the Hurt Complex has a similarity to Chicago’s Wrigley Field prior to 1988.

Not yet, anyway.  The Field is set up well and the grass looks great. There are newly installed bleachers and goal posts.  Just no lights yet.

“Boy, I wish we had lights,” Fink said.  “That would make a huge difference and that would be a real encouragement for people to come out.

“But I think that people realize they probably were here for the hottest game we’re ever going to have, for this season at least.  Things will be better in the stands, too.”

And that’s the deal.  It may never be that hot again for a football game at OBU.  So that’s not a factor that should keep anyone in the athletic department up at night.

And realistically, it didn’t seem to keep anyone away.  People came from far and wide to attend this special event.  Many people came.

“We had standing room only today,” Fink said.  “That was a challenge.”

“People were everywhere.  That’s a good thing and a bad thing.  There were some clogged up aisles and things, but you know, overall it was good experience.”

The team did its part, too.  The coaches and players carried themselves with character and performed with heart.

A touchdown pass on the first play from scrimmage is something that will be long remembered.  And the game itself was competitive to the very end.

Folks from Shawnee are not strangers to good football.  The Shawnee High School Wolves are perennial contenders and have taken two state titles (1973, 2003) in the absence of football at OBU.  Those fans should be proud of what they saw on Saturday.

And Fink summed it up well – a good experience.

The Bison lost 26-22 to Southwestern College (Kan.), but OBU fans experienced the win of having football on Bison Hill again.  And the care of the program and all its trappings is in good hands.