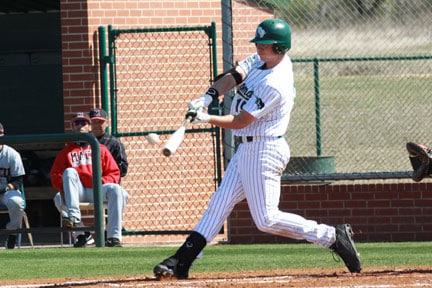 He is OBU’s first NAIA Player of the Year since pitcher David Hocking in 1989 and only the second Bison to be so honored.

“His numbers speak for themselves,” said veteran OBU Head Coach Bobby Cox. “He had one of the top five offensive seasons since I’ve been here. He did that against good people and that’s pretty impressive.”

Page, a native of Redwood City, Calif., led the NAIA in RBI with 85, while ranking second in home runs (15) and total bases (147), fifth in slugging percentage (.707) and 16th in doubles (20). The junior first baseman started all 63 games for Oklahoma Baptist this season. Page paced the squad in nearly every offensive category, including batting average (.385) and hits (80). His previously mentioned national rankings were also team highs. Page recorded 27 multi-hit games this season, including a string of four-straight from April 21 to 25. Defensively, he owned a .981 fielding percentage, committing only six errors in 311 chances.

Page also had two multi-home run games – swatting three against William Woods and two against USAO. He had four home runs and 12 RBI in two games on March 3 in wins over William Woods and Mount Mercy. In one USAO doubleheader, he had three homers and seven RBI. Page had eight games in which he had four or more RBI.

In addition to Player of the Year, Page is First-Team All-America. He is the fifth Bison to earn All-America honors in the last three seasons.