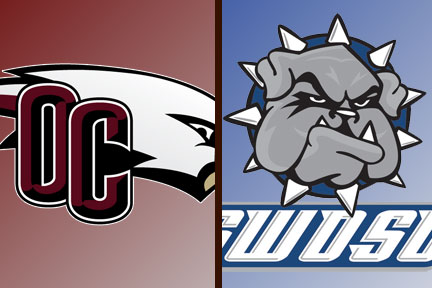 OC shortstop Kendra Pierce, named earlier in the day as the Heartland Conference softball hitter of the week, continued her early season run of success, going 3-for-8 with four RBIs in the doubleheader to lead the Lady Eagles’ offense against Southwestern (2-4).

OC (4-0) fell behind 1-0 in the first inning of the opener, as Southwestern’s Kori Oord delivered an RBI single off Moore. From there, the Bulldogs managed only three more hits off Moore (2-0) and Krystal Rodriguez. Moore allowed two hits, walked three and struck out one in four innings, while Rodriguez gave up two hits in three innings.

The Lady Eagles evened the score in the third against Southwestern pitcher Julianne Martinez (1-2), who allowed just three hits but walked seven batters. Kala Ratliff walked with one out, stole second and scored on a single to left field by Lauren Pittman.

OC added what proved to be the decisive runs in the fourth inning, with Pierce singling up the middle to score Monique Elliott and Sarah Peoples scoring on a groundout by Ratliff to make it 3-1.

In the second game, the Lady Eagles seized control with a four-run second-inning outburst against Southwestern starter Megan Ayala (0-1). Peoples and Pierce each contributed a two-run single during the inning for OC.

OC added a pair of runs in the sixth. Freshman Danielle Collins picked up her first collegiate RBI with a single to right field and Pierce followed later with a run-scoring double.

Taylor Mosher (2-0), who was named Monday as the Heartland Conference pitcher of the week, allowed only a leadoff double by Southwestern’s Summer Blackowl in the third inning. Mosher walked one and struck out seven in five innings. Moore pitched two scoreless innings to close out the win.