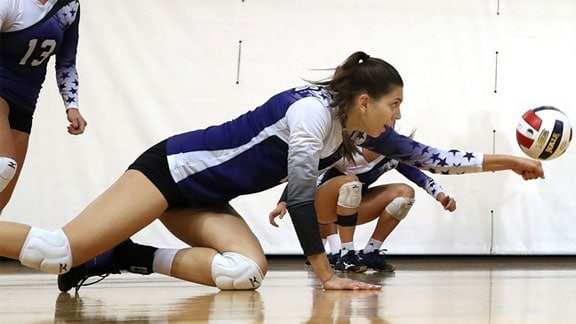 The Stars (28-3) advanced to a tournament semifinal match against John Brown (Ark.) at 4:30 p.m. Friday in Plainview, Texas.

“We made a big run in the second set,” OCU coach Kyle Steele said. “The middles were just huge tonight. Our setter had 44 assists, 30 of them from middles. She will probably tell you she didn’t have her best match. Holly probably had her best match tonight, and Manon was Manon. I’m pleased with the offensive performance tonight. We’re going there to Plainview with the mindset of getting two wins so we can host this tournament next year.”

In the first set, the Stars erased a 16-14 deficit. Randall hammered a kill, then teamed with Shekinah Clarke for a block that tied the set 16-16. Randall put away the first set with a kill.

In the second set, Bjelobrk knocked down a kill that gave OCU a 5-0 advantage. First Soraru and Clarke had a block, then Soraru and Vojnovic combined on a block that put the Stars ahead 8-2.

In the third, OCU came back from a 13-11 hole with four points in a row. Vojnovic served up consecutive aces to put the Stars on top 15-13.