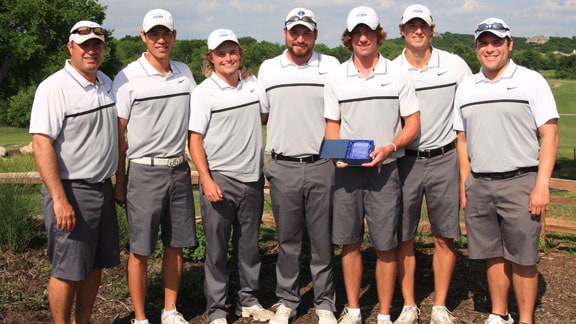 Oklahoma City notched its 21st SAC title by a 29-shot margin. OCU has won the SAC championship 18 of the past 20 years. Along with its two Midwestern City Conference titles, OCU owns 23 conference championships.

OCU’s Anthony Marchesani finished as runner-up in the SAC Championships for the second consecutive year. Marchesani, a senior from Rosebud, Victoria, Australia, turned in a 70-65-68–203 to become a three-time all-conference performer.

Kaminski reeled in SAC freshman of the year while setting the course tournament record with his second-round 63. Kaminski nailed 21 birdies over the 54 holes while knocking in an eagle on the par-5, 525-yard sixth hole Tuesday. Marchesani piled up 16 birdies.

Second-ranked Wayland Baptist (Texas) finished as team runner-up with a 286-290-283–859, while seventh-ranked Texas Wesleyan took third with a 290-283-288–861. OCU and Wayland Baptist earned the conference’s bids into the NAIA Championships on May 24-27 at TPC Deere Run in Silvis, Ill. National-tournament qualifiers will be announced May 12.

Also becoming all-conference were Andrew Williamson of Wayland Baptist, David Ravetto of Texas Wesleyan and Brett Kennedy of St. Gregory’s. Williamson, the SAC player of the year, shot a third-place 72-69-69–210. Ravetto picked up fourth at 73-67-72–212, and Kennedy finished fifth with a 72-69-73–214.

The temperature started at 66 degrees and reached 77 degrees. The skies were cloudy with winds not more than 5 mph.