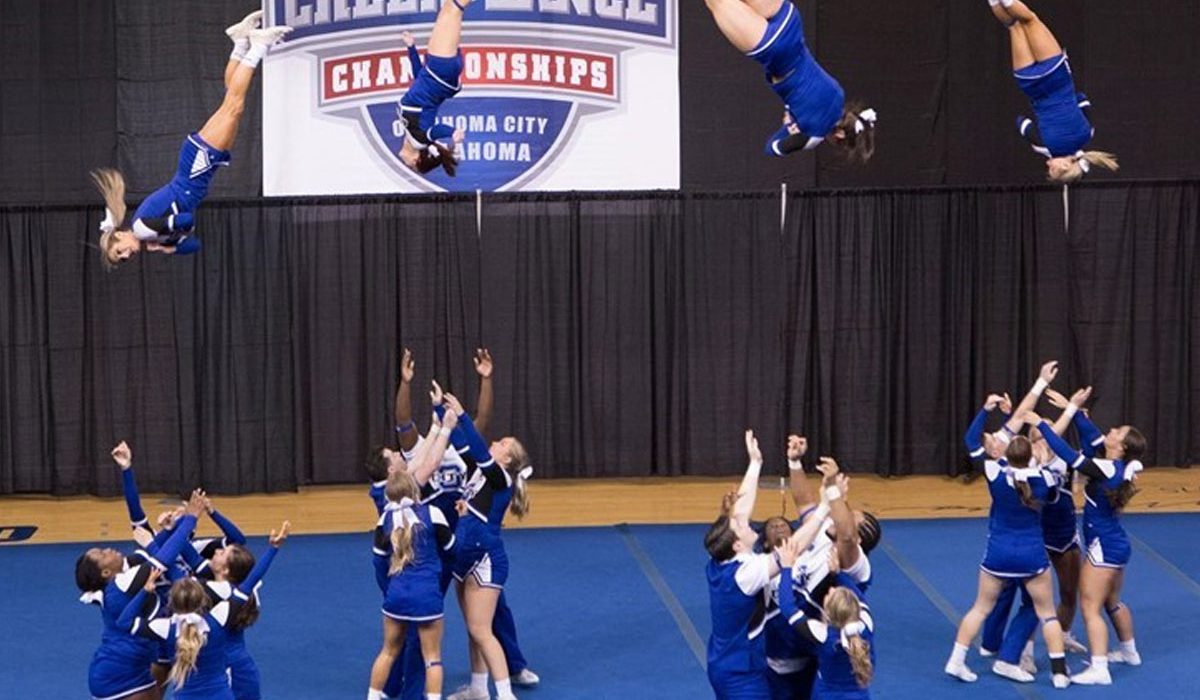 OKLAHOMA CITY – Oklahoma City University sits in first place in the cheer standings and second place in the dance standings after Friday’s preliminary round of the NAIA Competitive Cheer and Dance National Championships at Abe Lemons Arena.

The Stars’ cheer team posted a final score of 89.12 in round one, nearly four points ahead of second-place Missouri Valley. OCU’s dance team turned in a first-round score of 86.43, trailing leader St. Ambrose (Iowa) by one point.

Of the three schools competing in both cheer and dance, Oklahoma City is the only program to have both its teams inside the top three after day one.

OCU cheer was the only team to receive at least 90 points from more than one judge in the preliminary round. The Stars were also given a 9.5 points (out of 10) for scale of difficulty from two judges and landed two scores of 29 or better (with a max of 30 points possible) in the tumbling/jumping category. Oklahoma City had a subtotal score of 91.62 but lost 2.5 points in deductions for a final score of 89.12.

“I think our team had a pretty solid performance today,” OCU head coach Alicia Bailey said. “We definitely had some mistakes and have some things we can improve on for tomorrow, but it’s all little stuff that can definitely be fixed. I’m really excited about our standing and our score and where everything ended up, but we have to remember that tomorrow is a whole new day and tomorrow’s where most of the points count. We’re ready to show up and put a great performance out with hopefully zero deductions and have a great outcome.”

In the dance competition, Oklahoma City received a raw score of 85 or higher from all three judges. The Stars picked up two nines from the judges in the choreography category and had an average score of 8.63 for degree of difficulty. OCU finished with a subtotal of 88.43 but suffered two points of deductions for a final score of 86.43.

“I could not be prouder of the team and was pleased by their performance today,” OCU dance head coach Tasha Hinex said. “We had some nervous mistakes, but I know we’ll be better tomorrow. I’m looking forward to it.”

KANSAS CITY, Mo. – Oklahoma City University spirit squad members Alyson Gerde, Amanda Dolph and Sarah Todd were named NAIA scholar-athletes, the league announced Friday.
Gerde, a junior from The Colony, Texas, has a 3.95 cumulative grade-point average while majoring in early childhood education at OCU. Todd, a junior from Bridge Creek, Okla., owns a 3.51 GPA with a major in political science. Dolph, a senior from Havre, Mont., is majoring in music theatre with a GPA of 3.54.
Gerde and Todd were two of 86 competitive cheer student-athletes to be named a 2017-18 NAIA scholar-athlete, while Dolph was one of 58 competitive dance student-athletes to reel in the award.
In order to be nominated by an institution’s head coach or sports information director, a student-athlete must maintain a minimum grade point average of 3.5 on a 4.0 scale and must have achieved junior academic status.
The full list of NAIA scholar-athletes is available here.