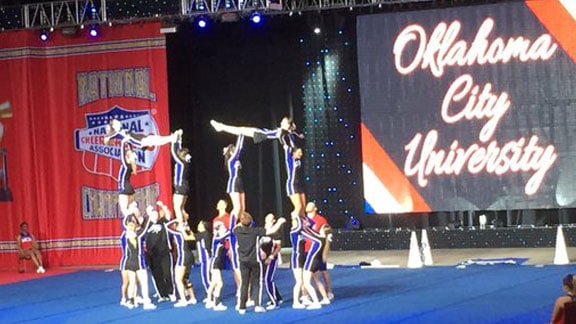 DAYTONA, Fla. – The Oklahoma City Dance and Cheer teams and the Central Cheer team got some attention on Thursday in Florida.

They were among a number of  squads from Oklahoma that did well in the preliminary round of NCA and NDA Competitive Cheer and Dance Championships in Daytona, Fla.

OCU Dance advances to the finals on Friday in Daytona, Fla. Photo by Jodi McWilliams.

OCU Dance moved on to the final round in first place in the NAIA Team Performance Small category. The Stars scored 8.728 and own a narrow advantage over Baker (Kan.) at 8.587.

OCU Cheer is also in first in the NAIA Small Coed cheer division. The Stars put up a score 91.05 in their category, ahead of Martin Methodist (Tenn.) with an 89.85.

UCO Cheer is also in the top spot heading into the finals in the Intermediate All-Girl II category, scoring 85.08, and ahead of Alma College (Mich.) at 83.60.

Oklahoma Baptist moves on as a finalist in All Girl Cheer Division II and is sitting in second place after Day One.

St. Gregory’s moved on through the Challenge Cup route, advancing to Friday competition at the top of the All Girl Cheer Division III standings.

And Oral Roberts finished seventh in Intermediate Coed I, but did not advance to the final.

The final day of competition in each of these categories in Friday and the groups will compete throughout the day at the Daytona Beach Band Shell.