OCU provides too much Star power for SAGU 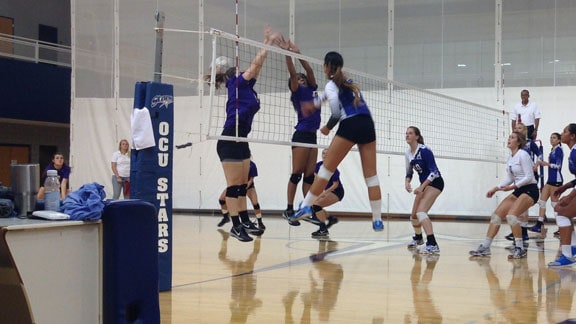 The OCU Stars volleyball team shined on a night in which even more Stars were recognized for their achievements.

And in between the second and third sets, the athletic department recognized the Cheer and Dance teams for the three national championships won this spring in Daytona, Fla., at the 2016 NCA/NDA competition.

OCU had a dominant performance in the first set and looked to cruise through the match.

But SAGU just didn’t go away quietly, hanging tough through the next two sets, forcing the Stars to go the distance in each to earn the sweep.

Sanja Vojnovic has 23 assists, five digs and three kills herself.

OCU also took the opportunity to recognize the Cheer and Pom teams, who in the spring swept the categories they entered with the National Cheerleaders Association and National Dance Alliance.

Oklahoma City University has 62 national championships to its credit. The Cheer and Dance teams have accounted for 16 of those.