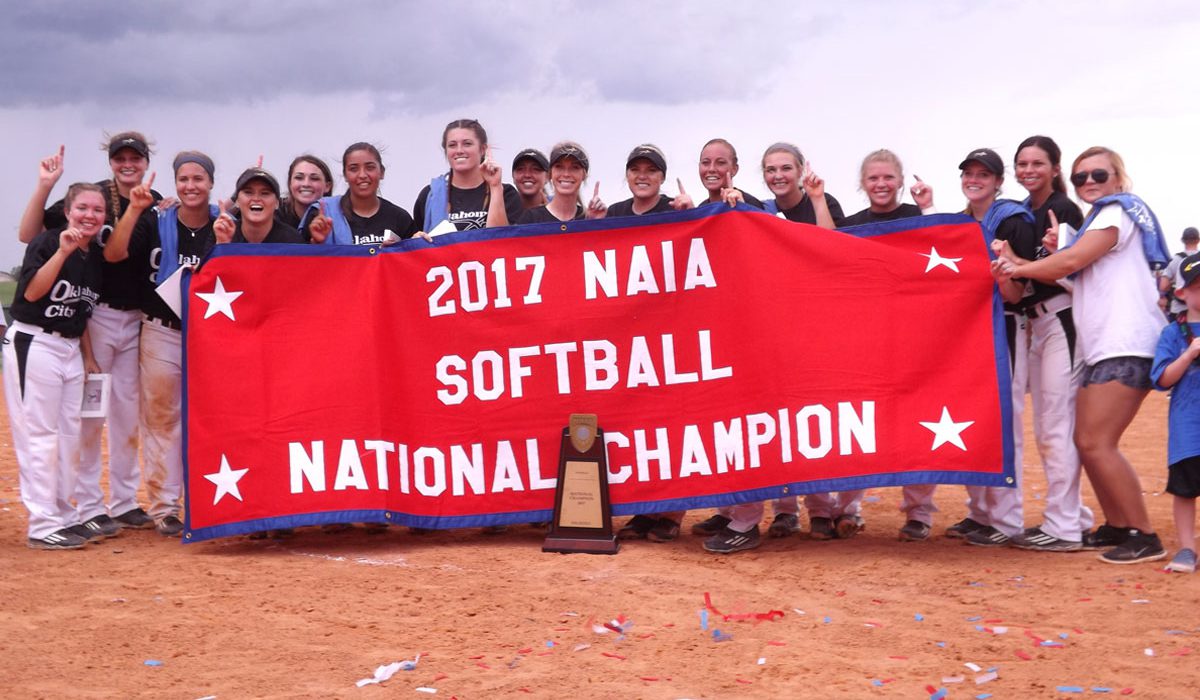 The Stars racked up 68 wins to fall one win shy of equaling OCU’s 1999 team for the most wins in program and NAIA history with 69. OCU reached the national final for the 15th time and improved its NAIA-record number of World Series victories to 124.

OCU ran its winning streak against NAIA competition to 73. The Stars’ lone loss of the season came 7-3 on April 18 at West Texas A&M in Canyon, Texas. West Texas A&M was ranked sixth in NCAA Division II at the time. OCU started the season 47-0 and set an NAIA record with a 52-game win streak.

“This was a very special group,” McSpadden said. “They’re a very competitive and resilient group.”

Wall garnered tournament most valuable player for the second consecutive year. She became the third two-time World Series MVP in NAIA history, joining Rhonda Clark of Emporia State (Kan.) in 1983-84 and Cassie Daniels from Auburn-Montgomery (Ala.) in 2014-15. Wall, a sophomore from Marlow, Okla., moved her record to 33-0 and career mark to 61-1.

Wall worked out of a bases-loaded jam in the fourth inning. After Paige Martin reached on an infield single and Raimee Sluder had a bunt hit, Wall struck out pinch hitter Chaleigh Kirkwood and retired Taylor Eilders on a groundout to second base.

“What I was so impressed with was, against the second-best team in the country, she didn’t have her best stuff, and found a way to beat them twice,” said McSpadden about Wall.

The Stars’ McRae Cayton, Laci Joyner and Jaci Smith snared all-tournament nods. In the first inning, Smith smacked a double, and Madison Ellis followed with a single. Cayton drove in OCU’s first run with a base hit past Iris Rodriguez at shortstop. Ellis scored on Joyner’s bunt as the Stars jumped out to a 2-0 lead in the first.

In the fifth, Cayton hammered a leadoff triple off the left-center field fence. Cayton scored on Joyner’s sacrifice fly to center. Ellis launched her 19th home run of the season beyond the left-field fence at the start of the seventh.

“Our M.O. all season has been try to score early and hang on,” McSpadden said.

Joyner, a junior from Mustang, Okla., turned in a 3-for-10 performance with a team-best five RBIs in the World Series. Joyner brought in two runs in the title-clinching win against Corban.

Corban (46-13) had three all-tournament selections with Aby Brambila, Jessie Isham and Raimee Sluder. Sam Woodley had an RBI single in the fifth for Corban’s run.