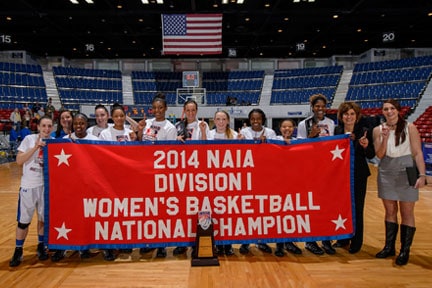 The OCU Stars had to play tough for all 40 minutes once again, but the payoff for this final win was a title.

No. 5 Oklahoma City defeated No. 2 Freed-Hardeman, 80-76, in the NAIA Division I women’s basketball championship game Tuesday night in Frankfort, Ky.  This is the seventh national title for OCU and the second in three years.

It was the fourth consecutive game in the tournament in which the outcome was in question right up to the final seconds.  In the four games following OCU’s opening round matchup with Langston, in which the Stars won by eight, the combined margin of victory was 11 points

Senior guard Kayla MacKenzie was named the tournament’s Most Valuable Player.  MacKenzie played the entire contest and recorded a stat line of 21 points, seven rebounds and five assists.  She was 5-of-9 from behind the arc and perfect in six attempts at the free throw line.

Junior guard Yvonte Neal had a game high 36 points, a career high as well, to go with eight rebounds and was recognized for her tournament performance as well, being named to the First Team All-Tournament team.

Oklahoma City (37-4) did not trail for the first 38 minutes with leads as high as 13 in the first half and 14 with just less than 11 minutes remaining.

But Freed-Hardeman (36-2), as OCU’s other opponents in the this tournament, would not go away.  Brittany Montgomery knocked down back-to-back three pointers to start a 23-8 run that gave FHU its first lead of the night, 70-69, with 1:59 left.

Neal was clutch down the stretch, putting in nine of the her team’s final 11 points, including the game winning field goal with 15 seconds remaining and game tied at 76 apiece.  She went 5-of-6 on the line in that span and made 10 of 11 free throws on the night.

OCU is now 7-3 all time in NAIA championship games and the seventh title ties the Stars with Southern Nazarene for the most in tournament history.