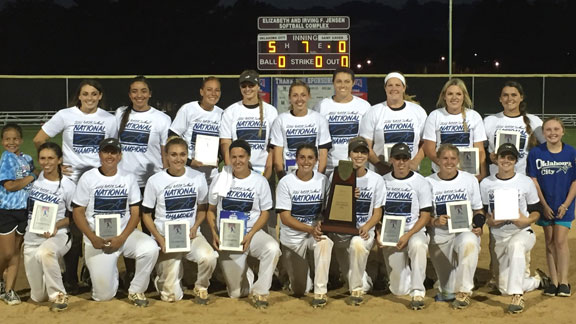 Oklahoma City’s 67 victories places this year’s team behind OCU’s 69 victories in 1999 on the NAIA’s single-season win list. Oklahoma City increased its NAIA-record World Series victories to 120, securing four wins on the last two days of this year’s World Series. Previous NAIA champions to earn victories in both the championship game and the if-necessary game were St. Mary’s (Texas) in 1986, Thomas (Ga.) in 2004 and Lubbock Christian (Texas) in 2008.

Phil McSpadden finished his 29th year as OCU coach with 1,545 victories, the most vs. four-year competition of any college softball coach.

“I have been blessed with so many talented athletes, but this team was special,” said McSpadden. “It’s not about coaching, it’s recruiting. We had team speed. We had power. I thought we were pretty solid offensively. We replaced our entire outfield and as far as pitching, we had most of the tools.”

Georgia Wall took the NAIA Softball World Series most valuable player award. Wall, a freshman from Marlow, Okla., posted a 6-1 record with a 0.61 earned run average, 21 strikeouts and 46 innings pitched during the World Series. Her 0.47 ERA led the NAIA this season.

Madison Ellis and Jaci Smith grabbed all-tournament honors. Ellis, a junior from Yukon, Okla., smashed a two-run home run for the winning hit in the title game. Ellis produced a .550 average, four doubles, a triple, two homers, nine RBIs and a 1.150 slugging percentage during the tournament. Smith, a freshman from Godley, Texas, belted a three-run homer to fuel a 7-1 stomping of Williams Baptist (Ark.) on Tuesday.

In the championship game, Ellis staked OCU to a 2-0 second-inning advantage by crushing a 1-1 pitch over the left-field fence with Sha Ingram on base. Ingram pinch-ran for Leslie Miller, who nailed a base hit over Saint Xavier third baseman Jessica Arebalo and shortstop Rebekah Ferguson.

Saint Xavier’s Nicole Nonnemacher, the two-time NAIA pitcher of the year, escaped bases-full jams in the fourth and the sixth. Nonnemacher faced bases-loaded situations with one out and struck out two Stars each time. Nonnemacher had gone 24 innings during the World Series without being scored upon until Thursday. She tossed back-to-back one-hit shutouts, the second of which propelled Saint Xavier past the Stars 1-0 on Monday.

In the top of the seventh, Miller hammered a three-run blast beyond the left-field fence with two out. Kali Pugh and Kyndra Holasek preceded Miller’s shot with base hits.

Wall shut down Saint Xavier (46-10-1) on four hits and five walks. Wall improved to 28-1 with her 21st complete game and 10th shutout of the year. She fanned one and forced 12 groundouts.

Holasek, a senior from Mustang, Okla., was 2-for-4 with a run scored. Holasek extended her OCU and NAIA career record hit total to 404.

In forcing the second game, Holasek made the difference by nailing a double into right field to score Smith. Saint Xavier right fielder Frankie Demack sent the relay throw into the dugout to allow Holasek to also reach home plate on the play. OCU led 2-0 in the fourth. Smith reached on an error to lead off the fourth.

Wall made the runs stand by limiting Saint Xavier to Nonnemacher’s infield hit in the first. Wall retired 11 in a row, setting down Saint Xavier in order in the fourth, fifth and sixth. Saint Xavier put two runners on via hit by pitch and another using an error. Wall struck out three.