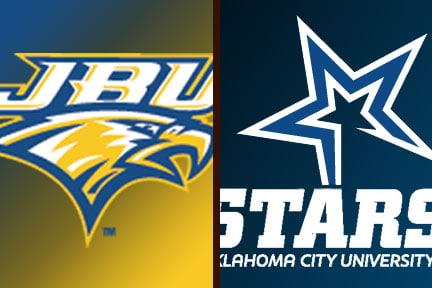 Neither team scored for the final 2:22 of the game, but Oklahoma City had built enough of a lead to hold on for the win in the Fab Four.

OCU defeated John Brown, 67-65, in the all SAC side of the NAIA Division I women’s basketball tournament semifinals.  The Stars will play Tuesday at 5:30 p.m. for the national championship at the Convention Center in Frankfort, Ky.

Autumn Huffman continued her big play in the tournament and led her team with 17 points.  She scored the final six points for her team, including a field goal with 4:24 remaining that proved to be the game winner.

Ouleymatou Coulibaly had a double-double with 12 points and 12 rebounds.  Yvonte Neal also had 12 points and Kayla MacKenzie scored 13.

Sierra Shipley had 27 points for John Brown, but her final shot missed as time expired.

The Stars (25-4) have won their last three games by a combined seven points.

No. 5 Oklahoma City will make its 10th appearance in the NAIA championship game and will meet No. 2 Freed-Hardeman (35-1) on Tuesday.