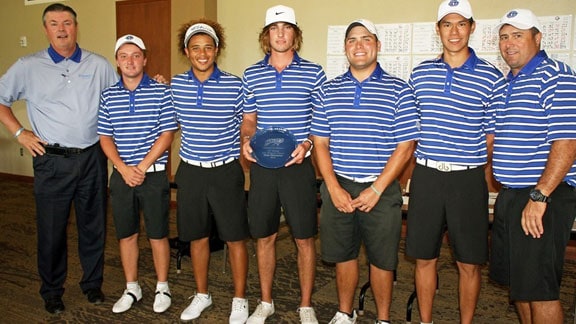 The Stars picked up the win by 10 strokes over third-ranked Texas Wesleyan. Fourth-place Oklahoma Wesleyan entered the season ranked 17th, while 19th-ranked The Master’s (Calif.) finished 11th on the par-71, 6,576-yard course.

Cheung held off Adam Blomme of Odessa by one stroke. Blomme finished second place after winning the tournament last year. Cheung turned in a 68-65-65–198. Cheung, a senior from Brisbane, Queensland, Australia, nailed 14 birdies and three eagles during the tournament. Cheung finished runner-up in the NAIA Championships as OCU win the national crown in May.

“It’s good to finally get over the hump and get my first collegiate win,” Cheung said. “I am looking forward to a great year with a great bunch of guys.”

At the course, the temperature rose from 77 degrees at the shotgun start to 91 degrees. The wind blew from 16-20 mph with gusts up to 26 mph.

The Stars tee it up next in The Mid-South at Sand Creek Station Golf Club in Newton, Kan.