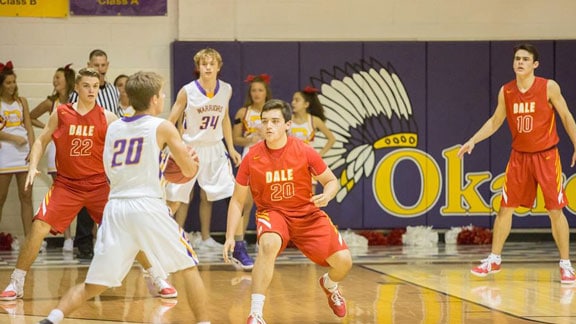 Pretty good. But the number of the day wasn’t 16.

In his 43rd season as a head coach, West played the feat down somewhat. 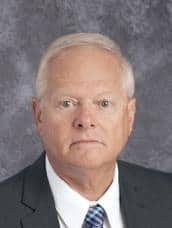 “I’ll tell you one thing it means is that I’ve been in the business for a long time and that I’m pretty old,” West said.

But as he said he had been doing this thing for a while, he also put a little more perspective into how a milestone like this is achieved.

He has spent more than half of those 43 years at Okarche, but his travels to get there have given him opportunities to coach through central and western Oklahoma.

West attended college at Southwestern Oklahoma State University and as a student assistant got to work with the JV at Weatherford High School. And he knew from then he wanted to coach.

His first stop as a head coach took him Fort Supply, where he spent two years. From there, it was Gould – now consolidated with Hollis (one year), Purcell (one year), Mountain View (three years), Mustang (one year), Cordell (12 years) and now Okarche, where he is in his 23 season at the helm.

During his season at Mustang, West experienced something that kept him working in the high school ranks.

“When I was moving around there early, my dream was to coach in college. But when I hit Mustang, I went on a college recruiting trip and I decided that I didn’t want to do that because it just takes so much of your time.

“I don’t see how you can have a family and be a college coach. It takes a special person and a special spouse to endure that because evidently it takes so much time to do it.”

And while the 800-win plateau is a place with rarified air, West isn’t the first or only basketball coach at his own school to achieve the feat.

Amazing to think that two coaches, each with at least 800 wins are working at the same school.

“I think it’s neat,” West said. “But what is even neater is that my son (Aaron West) coaches with me, he’s my assistant and coaches junior high and elementary, and Coach Myers’ daughter (Haley Mitchell) is her assistant and does the same thing with the younger students.

“We’ve got 800 wins each, sure, but we have our children coaching with us. That is a really neat deal.

“And I even have three of my grandchildren in my P.E. classes.”

West, who graduated from Dill City High School before the consolidation with Burns Flat, has seen many changes in the sport since Win No. 1. And he said one of the biggest differences between then and now was the opportunities the kids have.

“There many more things now that kids can do, much more than when I started. I started in northwest Oklahoma and the big event was basketball.

“But now you have social media and all these things that kids can do. That’s evolved.”

He said the style of play had also evolved and even the game itself.

“When I started, I was coaching boys and girls both, and we were six-on-six back then. That’s certainly evolved in the girls’ game.

“Matter of fact, when I came to Okarche, I was coaching boys and girls both and I’m the one that started five-on-five here. We were almost the last school in the state to go five-on-five.”

West also said he was fortunate to have been on the road he was on to be at the places he stopped.

“Every place I’ve been, I’ve had great kids to work with and great communities and school systems. That’s what sticks out in my mind.”

Okarche will look for its 17th win of the year – and West’s 801st of his career – on Tuesday on the road at Crescent.