OKC Bounces Back Against the Bobcats 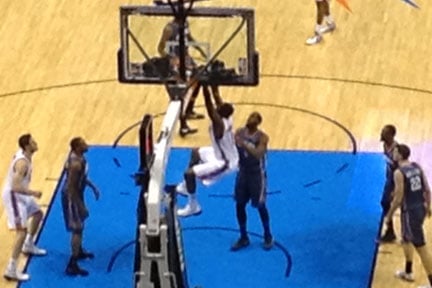 Just one night after the Thunder suffered their second loss at home, they came out with the intensity that allowed them to defeat the Charlotte Bobcats 122-95 to move to 32-9 on the season.  Charlotte made it a game for the first quarter, trailing by only three points after the first 12 minutes.  In the second quarter, however, the Thunder outscored their opponent 30-15 to lead by 18 at the half, and they never looked back.

The Thunder’s big three scored 82 of the team’s 122 points.  The Thunder had their most efficient night from the field, shooting 63% for the game.  The teams also shot 43.5% from three-point land.  James Harden raised his career high to 33 points after getting to 30 for the first time Wednesday night against Phoenix.

While Durant, Westbrook, and Harden showed up in a big way to lead the team to this win, the rest of the team contributed in different ways.  Twelve different Thunder players scored, and six players contributed to block 13 shots.  The team also had a season high 27 assists, a stat that Head Coach Scott Brooks and Forward Kevin Durant were excited about after the game.

Rookie Reggie Jackson led the team with seven assists in 21 minutes.  The rest of the Thunder’s bench also played well.  Cole Aldrich again made an impact on the game in his 10 minutes, with 6 points, 6 rebounds, and 1 steal.

Two former Thunder players were in the house for OKC’s victory.  D.J. White and Byron Mullens both saw productive minutes for the Bobcats.  White shot 4 of 7 in 22 minutes, and Mullens went 6 of 8 in 19 minutes.

The Thunder now look ahead to prepare for the visiting Houston Rockets on Tuesday night before they go on the road to face the Denver Nuggets on Thursday evening.