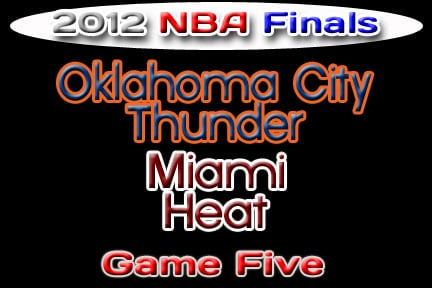 Every team starts the season with a championship as the goal, and the Oklahoma City Thunder came closer than they ever have before.  In the end, the Miami Heat proved to be too much, defeating the Thunder in Game 5 of the NBA Finals, 121-106.

The Thunder stayed within striking distance at the end of the first half, coming back from a 17-point deficit to trail by only 10 at the half.  At the start of the third quarter, OKC looked like they might start a run.  They had a chance to cut the lead to three points, but a turnover in transition squelched that opportunity.  From that point on the Heat never looked back.  By the end of the third quarter, they led the Thunder 95-71.

In the victory, Miami’s LeBron James recorded a triple-double with 26 points, 11 rebounds and 13 assists.  He was helped by Dwyane Wade and Chris Bosh, who combined for 54 points.  Mike Miller added 23 points of his own, shooting 7-8 from long distance in only 23 minutes.

For the Thunder, Kevin Durant led all scorers with 32 points, and he also grabbed 11 rebounds for a double-double.  Russell Westbrook and James Harden each had 19 points as well.  Derek Fisher, one of the veteran leaders on the team, scored 11 points.  OKC was able to attack tonight in a way that put them at the line for 26 free throw attempts where they got 23 points.

This young Thunder team is just three seasons removed from their first season in Oklahoma City, in which they finished with a 23-59 record.  Since then, in each playoff appearance, they were eliminated by the eventual champions, and they continued to imporve each year.  With Kevin Durant, Russell Westbrook, James Harden, and Serge Ibaka all under 24 years old, the Thunder have good reason to hope that trend will continue in the years to come.