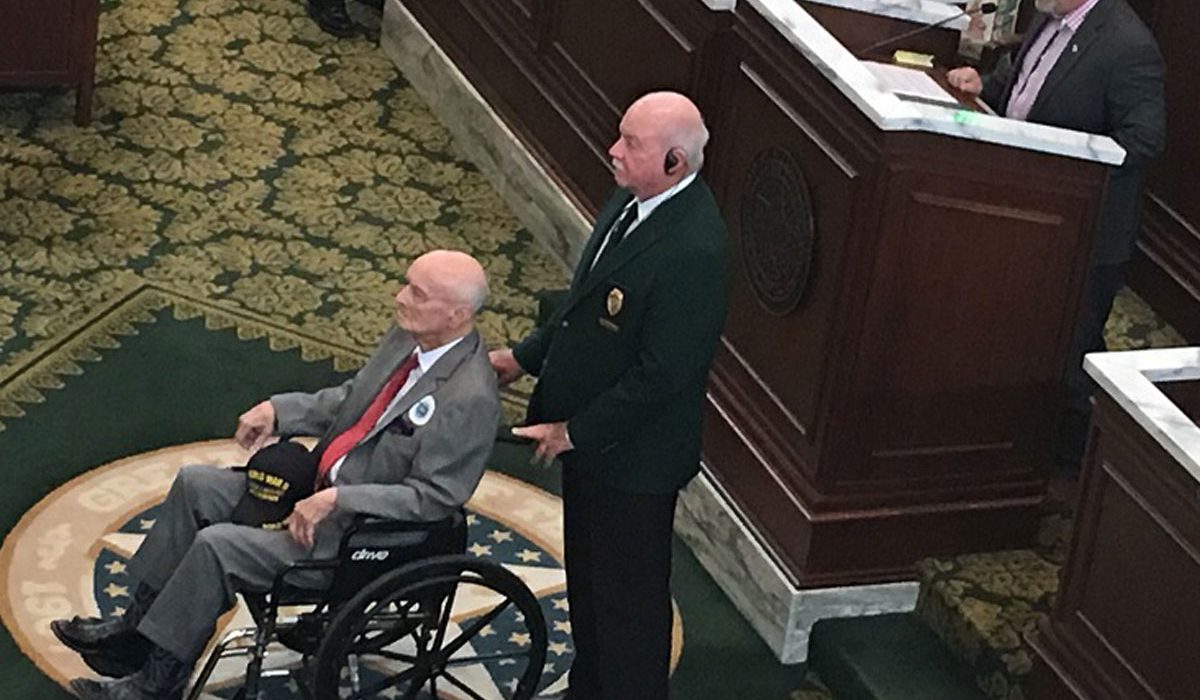 Making it an extra special day for the Choctaw Nation, 100-year-old tribal member Leo Smallwood was honored as the Oklahoma Veteran of the Week by the House of Representatives. The recognition was held at 1:30 p.m. Monday at the State Capitol. It was the first agenda item for the House Monday.

Rep. Justin Humphrey, R-Dist. 19, is the sponsoring legislator and introduced Smallwood, who was escorted in front of the podium. Rep. Humphrey also noted that three previous legislators acquainted with Smallwood were present for the event: former Reps. Tommy Thomas and R.C. Pruett and former Sen. Jerry Ellis.

Smallwood and his late wife Jane had six children, 12 grandchildren and 8 great-grandchildren. Many were present.

Smallwood was a teacher at Frazier Valley when he was drafted into the U.S. Army during World War II. He was in the Infantry and fought in the Battle of the Bulge.

The citation, read by the House Clerk, highlighted that retired Army Staff Sgt. Smallwood is not only one of the oldest Choctaw veterans and an honored Choctaw elder, but is one of the oldest World War II veterans in the State of Oklahoma. It also lists some of the military awards Smallwood received, including the Sharp Shooter Rifle Medal, World War II Victory Medal and the European-African-Middle Eastern Campaign Service Ribbon with Three Bronze Stars.

After returning home, he began coaching and teaching for Rattan schools. During his coaching career he led the school to over 625 victories and 15 district titles in baseball and over 600 wins and nine district titles in basketball. After coaching and teaching for over 20 years, Smallwood transitioned into the role of Principal for the next 20 years, giving over 40 years of service to the Rattan School System.

Smallwood’s wife Jane was a third-grade teacher. The Oklahoma Coaches Hall of Fame inductee credits her with being by his side when he was a coach, teacher and principal until she passed-away in 2016. It was during this portion of the reading that Smallwood’s eyes teared up and his hand wiped across his cheek. As he was handed his citation the entire State Legislature and house gallery stood at attention, applauding the Choctaw veteran.