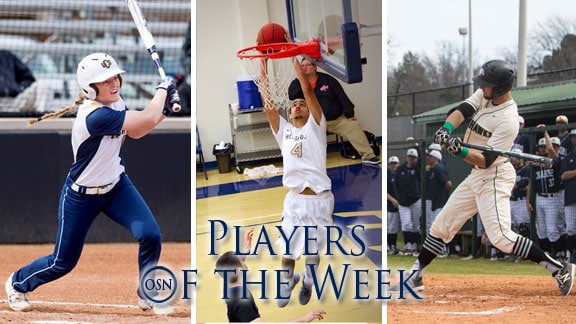 Heard helped her team to a sweep of league foe Lindenwood, hitting .750 in the four-game series. The sophomore was 9-for-12, which included a home run and four doubles. He had at least one hit in each of the four games and scored eight times.

The senior led his team through a three-game stretch in three days to win the NCCAA Division II national championship. including 27 points in a 97-84 win over Grace Bible in the title game. Sneed averaged 23.0 points and 8.7 rebounds per game for the tournament and brought Tournament MVP honors back to Moore.

Begovich was 5-for-11 from the plate in the RiverHawks’ sweep at Lincoln last week. And all five of his hits were home runs. The senior blasted in 12 RBIs and scored nine times himself during the three-game series. He was walked seven times and had a stolen base.