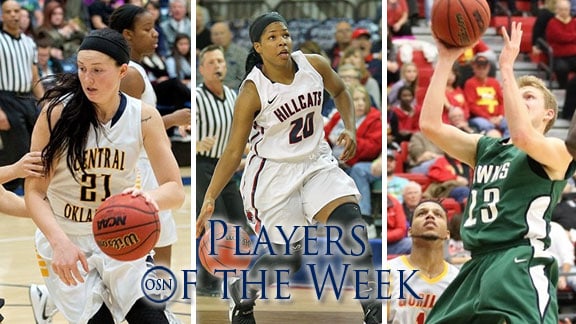 There were two last second game-winning shots in D-II on Thursday evening. Mason put in the first one over Southern Nazarene in the final home game in 2015 and last non-conference game of the season. The senior had 15 points on the night, to go with four rebounds and three steals, and no points were bigger than her jumper at the right elbow with 2.6 seconds remaining to put Central (8-2) on top, 64-62.

The last three games for the Hillcats have been decided by four points. Although RSU had a 14-point lead in the second half, the Lady Lions made it tight and the game went back and forth in the fourth. It was tied again at 64-apeice with 10 seconds left, but Block’s jumper with four seconds remaining untied the game and gave the Hillcats (6-2) a 66-64 win in their first Heartland Conference game of the year. Block had nine points, five boards and four assists on the night.

The RiverHawks stopped a six-game slide on Saturday at home, 92-73, over rival UCO. Five players scored in double figures and that was helped by the play of Williams. The junior dished out 11 assists, and nearly had a double-double without points factoring in as he brought down eight rebounds. Williams scored five points, too.