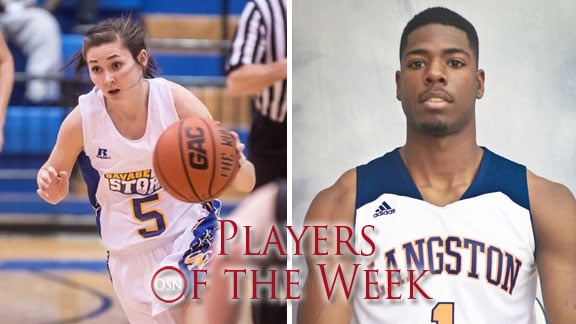 This week’s Oklahoma college Players of the Week, presented by First United, are Olivia Potter, SE, and Terrell Jones, LU.

Potter set a new record for made three-pointers in the Great American Conference, knocking down 10 of them in a 103-95 loss to Harding on Saturday. The junior hit 50 percent of her shots from the field and 50 percent from behind the arc, as well, and recorded 38 points on the afternoon, a high for the Storm this season. She was also 6-of-7 from the free throw line and had four assists.

Jones put up a double-double in both games this week for Langston. He had 13 points and 12 rebounds in a win over Huston-Tillotson. Jones followed that with 17 points and 10 boards in the 21st-ranked Lions’ 74-63 win over Our Lady of the Lake on Saturday. The victory was the first for Langston in 13 all-time attempts against OLLU.