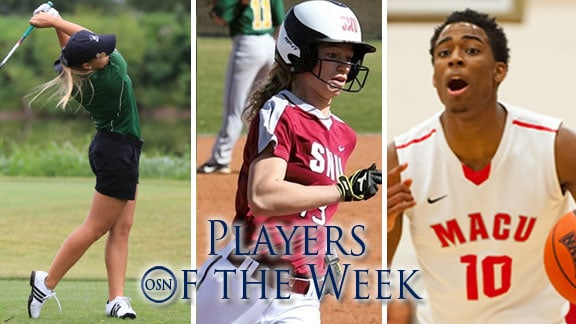 Price helped the RiverHawks to their fourth team title of the year, winning the UNK Spring Classic in Kearney, Neb. The junior shot a 145 for the tournament and had a 2-under day on Easter Sunday and claimed the individual title at the event. It is her second individual title this season.

Southern Nazarene earned its first series sweep since joining Division II behind a strong showing from Smith. After going 0-for-3 in the first game against Northwestern this weekend, she went 7-for-7 in the next three games – which included two home runs – hitting .700 for the series. Smith knocked in nine RBIs, scored five times and had there stolen bases.

From start to finish in the NAIA Tournament, the Evangels advanced by way of a total team effort. But the final play couldn’t go unrecognized. With his team trailing, 99-98, with 4.2 seconds left in overtime of the national championship game, Mann drove the length of the court, collected the ball that nearly got away from him, put up a shot from just outside the lane, which went off the glass, the front of the rim and the back of the rim twice and fell in – for the win and the title. That play will be etched forever in the history of an already historic NAIA Tournament lore.