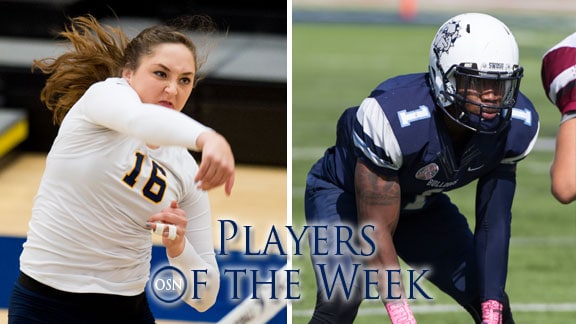 This week’s Oklahoma college Players of the Week, presented by First United, are Taylor Bevis, UCO, and Trevon Hartfield, SWOSU.

The Bronchos put up three sweeps on opponents last week, led by Bevis’ solid play. The freshman notched at least 12 kills in each of the matches that lasted only three sets apiece and had a hitting percentage of .468 for the week. UCO has won four straight as is now 26-3 on the year with two regular season matches remaining.

For the first time since 1993, the Bulldogs have won five straight and Hartfield did his part in the win. The senior recorded a career-high tackles and two interceptions. Both picks were followed by touchdowns, crucial in the 28-14 win over Arkansas Tech. SWOSU is now 7-3.