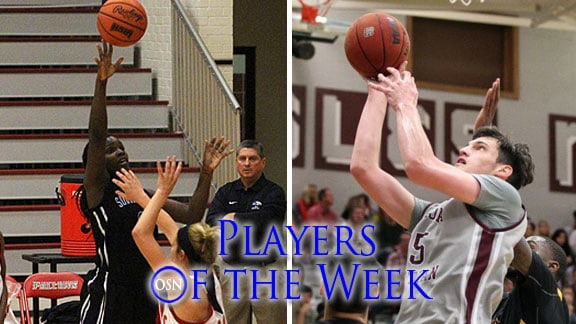 This week’s Oklahoma college Players of the Week, presented by First United, are Ellora Johnson, SCU, and John Moon, OC.

Johnson had 20 points and 15 rebounds as the Lady Eagles won, 77-53, over Central Christian just before Thanksgiving, their second win over the Falcons this season. The junior is in the top 25 in the NAIA, averaging 8.7 rebounds/game.

Moon had dominating performances in the Central Oklahoma Thanksgiving Classic last week. He put up a career-high 38 points, along with 12 rebounds and six blocks in a 92-91 win over rival Southern Nazarene, and the first win of the season. The junior had 20 points and nine boards in an 83-70 loss to Oklahoma City the next night, to average 29 ppg for the festival.