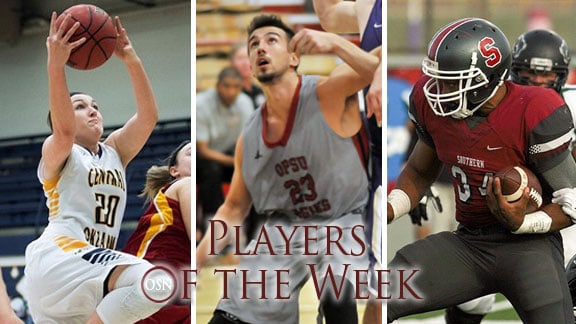 Solberg scored a career-high 36 points in a come-from-behind win over Northwestern in the GAC/MIAA Challenge on Saturday. She was responsible for 14 of the Bronchos’ 24 points in the fourth quarter, and scored eight in a 16-2 run that gave her team the lead in the 72-65 win. The senior also led her team with 15 points the night before and UCO is now 2-0 to start the year.

The senior transfer is having an impact early for the Aggies. Arsenovic had double-doubles in each of his first two games in Goodwell, helping his team to a 2-0 start. He scored 14 points and had a team-high 10 boards on Friday night and had 11 points and 12 rebounds on Saturday in wins over Western New Mexico.

The streak is over. Southern Nazarene halted a 32-game losing streak with a 33-32 win over Oklahoma Baptist and Olds was key to the victory. His 25-yard touchdown run in overtime gave the Crimson Storm the points it would need to secure the win. Olds had 26 carries for 160 yards, along with 2 catches for 29 yards, in the win that was a long time coming.