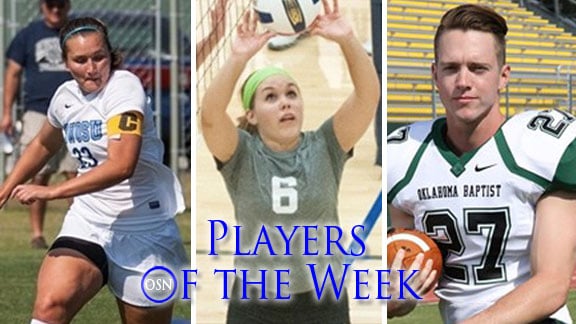 Eastman led the way for the Bulldogs in a 5-0 victory over East Central on Saturday, and helped her team to keep an undefeated record in Great American Conference play at 7-0-1. The senior had a hat trick, with goals in the seventh minute (the game-winner), the 53rd and the 57th. It was the first hat trick for SWOSU since 2011. Eastman also had a goal at Northwestern on Tuesday to make it four on the week, and she’s had six in the past three matches.

Watson has been instrumental in helping her team to a 10-0 record in Sooner Athletic Conference play. The senior recorded 101 assists in two matches last week, victories over John Brown and Mid-America Christian. Watson had a career-high 58 assists against MACU as the Stars rallied from down, 0-2. Watson also had 14 digs in the win.

Oklahoma Baptist trailed Northwestern, 24-0, late in the second quarter. Then the Bison scored the next 27 points to take a lead. The run was highlighted by two touchdown runs from Eliis, of 81 and 44 yards. The senior put up a career-high 211 rushing yards on the day on 25 carries. He also opened the second half with a 50-yard kickoff return against his former team.