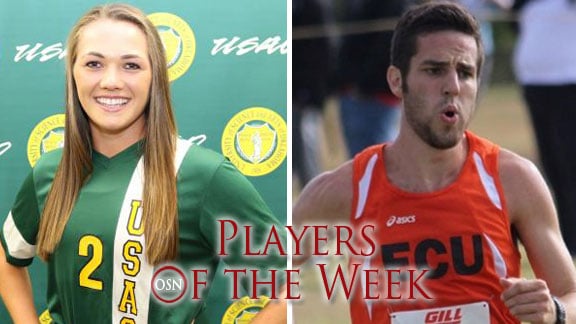 This week’s Oklahoma college Players of the Week, presented by First United, are Ryah Vyse, USAO, and Will Baldwin, ECU.

Ryah Vyse, senior, University of Science and Arts of Oklahoma

The senior led her team to a win on Tuesday, the sixth in what is now a seven-game winning streak. Vyse had two goals and an assist as USAO (9-4-2, 7-0 SAC) beat Texas Wesleyan in Chickasha. She assisted Shay Nash in the 31st minute to tie the match and quickly followed that with a goal in the 34th. Vyse had the game-winner in the 69th minute as the Drovers won, 3-2. She now has 10 goals and six assists on the season.

East Central won another Great American Conference cross-country championship, the fourth in five years, and did it by placing five runners in the top eight. The Tigers were led by Baldwin, who claimed the individual title by running the 8K in 24:18.34 and was named the GAC Runner of the Year.