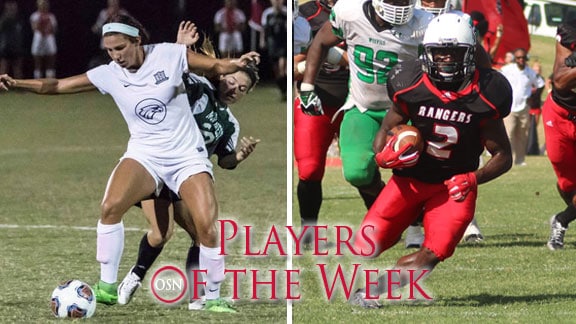 This week’s Oklahoma college Players of the Week presented by First United are Anastasia Robinson, NSU, and Jarion Tudman, NWOSU.

The RiverHawks are flying high this season with a 7-1 win-loss record and have been setting other records as well. Robinson had a career-best this week, recording six points in Northeastern State’s 4-1 win over Northwest Missouri on Thursday. The junior had two goals and two assists and was a part of all four scores for NSU.

In his first game on the field this season, the junior running back racked up yardage with through the air and in special teams. Tudman got his team on the board in the first quarter with a 75-yard touchdown reception. Although shut down in his running game, he had five catches for 187 yards. Tudman also returned three kickoffs for 62 yards and amassed 247 all-purpose yards.