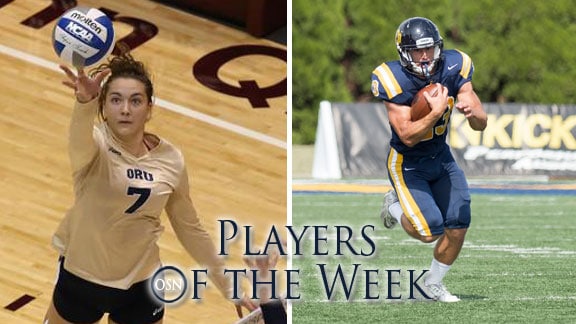 This week’s Players of the Week presented by First United are Laura Milos, ORU, and Clay McKenzie, UCO.

The Golden Eagles have won five straight and Milos is leading the way. She is averaging 5.03 kills per set on the season and had two huge performances last week. Milos recorded a double-double in a four-set win against IUPUI on Friday with 25 kills and 13 digs. On Sunday, she had 20 kills in a sweep of IPFW with a hitting percentage of .412. Milos averaged 6.43 kills per set over the two wins.

The Bronchos benefitted from a career day from McKenzie to pick up their first win. The sophomore used 22 carries to pick up 141 yards and a touchdown and had 48 rushing yards in the fourth quarter. McKenzie also had a pair of receptions and gained 31 receiving yards. He has also quietly gained 464 yards on the season so far, the most by any college running back in the state.