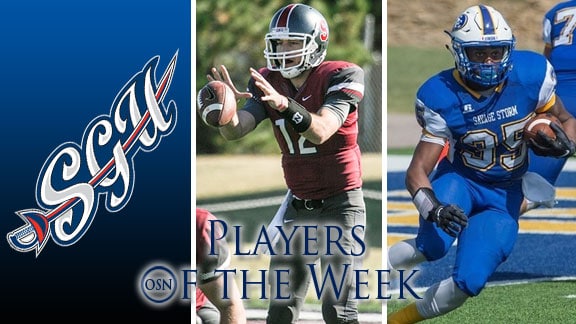 It’s not just one player this week – and we’re not going to pick just one. The Cavs’ win streak is up to 10 following a 3-1 win at John Brown on Saturday. It was a milestone victory in itself, as it marked the first-ever win over JBU. Three players recorded double-doubles: Ashlyn Broussard (22 kills, 14 digs), Gabby Ware (11 kills, 30 digs) and Sarah Ahrens (45 assists, 15 digs). Also noted is the play of Courtney Murphy, who put up 10 kills and seven blocks, a day after she had 14 blocks against Bacone.

The former walk-on at Southeastern has made a name for himself over the past few years. Wortham put his name at the top of two lists in the record books in Durant. The senior rushed for 195 yards in a 55-34 win over Northwestern, which allowed him to pass Earnest Hunter as the all-time career rushing leader at the school. He now has 3,066 yards with five games to go. Wortham also recorded six rushing touchdowns on the afternoon, passing a nearly-century old mark of five, set against Oklahoma City University in 1922.