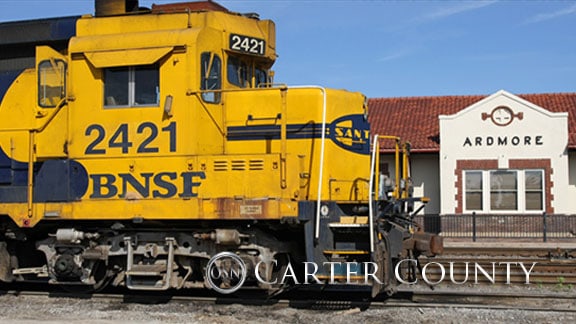 Photo provided by the Ardmore Chamber of Commerce.

County seat: Ardmore
Population: 48,000
High schools (8): Ardmore Tigers, Dickson Comets, Fox Foxes, Healdton Bulldogs, Lone Grove Longhorns, Plainview Indians, Springer Cardinals, Wilson Eagles
Universities: None
State championships (131): Ardmore picked up the first in the county, winning in football in 1953. Two schools have 50+ titles to their credit: Ardmore with 55 – 13 in boys golf and 10 each in boys and girls track and Plainview with 51 – 17 apiece in girls track and in girls cross country. Fox adds 12 more and five each in girls and boys track (four straight 1984-1987). Headlton has earned four, Dickson and Lone Grove have three each and Wilson owns two. Additionally, the now-defunct Douglass High School in Ardmore had a football state championship in 1957.

• Jermaine Gresham: Played football and basketball at Ardmore High School (Class of 2006), All-State and Parade All-American in football, played on two state runner-up teams and a state semifinalist in basketball; Played football at the University of Oklahoma, was First Team All Big 12 and First Team All-American in 2008; Drafted by the Cincinnati Bengals in 2010 and played for the Bengals from 2010-2014.

• 1992-1993 Ardmore Tiger athletics
It was an amazing year for the Tigers, who won six state titles during that school year. It started with the “Snow Bowl”, in which the football team claimed it second state title in three years, beating Douglass, 34-14, in the only championship game that was held that day. Then the girls and boys basketball teams won state titles on the same day. The spring sports followed and the Tigers took state in girls tennis, boys tennis and boys track.

How do you get to Carter County?  It is right in the middle of the state horizontally and the county’s southern border is about 25 miles north of the Red River.  And you can get to Carter County or any county in Oklahoma in a vehicle from the Stuteville Automotive Group, with locations in Atoka, Durant and Tahlequah.