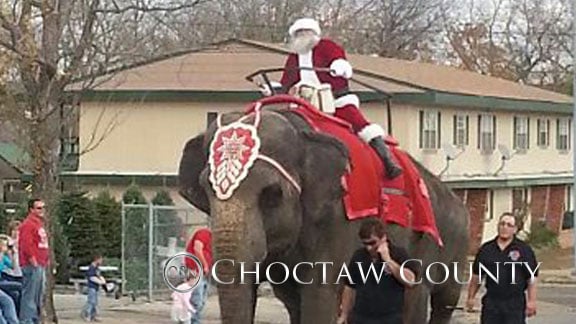 Hugo, county seat of Choctaw County, is known as Circus City USA, so naturally Santa would ride on an elephant in the Christmas Parade. Photo provided by Hugo Area Chamber of Commerce.

• Richard Billingsley: Hugo gentleman who created his own college football rankings system – the Billingsley Report – that was used by the Bowl Championship Series (BCS) to help determine the Division I football teams that would play for the national championship; His work can be found at the College Football Research Center (cfrc.com)

• 1972
For a county that has only 11 state titles, it’s a big year when three are earned. On March 4, both girls and boys basketball teams at Fort Towson won the Class A championships: the girls beat Bowlegs, 75-53, behind 30 points from Belinda Candler and 28 from Janice Fuller; the boys won over Depew, 65-55, with 34 points coming from Zack Jenkins. This also marked the first time in Oklahoma high school history that a school had won the girls and boys basketball state championship in the same year.
On May 13, the Hugo Buffaloes won the boys track title in Class 2A, with the highlight being the Buffaloes’ 1-2-3 finish in the 440-yard dash.
Additionally, it was also the first year any school in the county won a state title.

How do you get to Choctaw County?  It is in the southwest quadrant of the state on the Red River and you can get to any county in Oklahoma in a vehicle from the Stuteville Automotive Group, with locations in Atoka, Durant and Tahlequah.