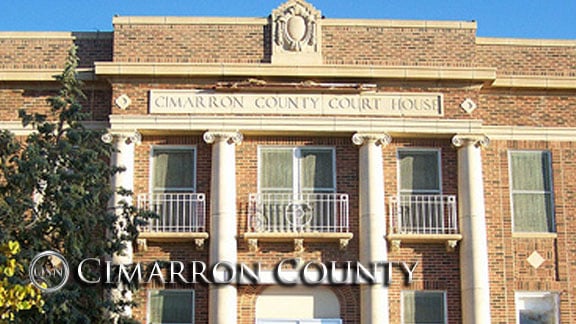 County seat: Boise City
Population: 2,500
High schools (3): Boise City Wildcats, Felt Bulldogs, Keyes Pirates
Universities: None
State championships (16): This county knows how to train high schoolers to run. All 16 state titles have come in either track or cross country. Boise City has 14 state championships – seven in girls track, six in boys track (with the first for the county coming in 1969) and one in girls cross country. Keyes has one in boys cross country. And in 2010, the two schools combined to form a girls track team that won a title.

• Melvin Begley: Played football and baseball at Boise City (Class of 1956), and was named to the NewsOK All-Century Baseball team, having a state record and national record batting average of .804 in a single season (1954); Played football for Oklahoma Panhandle State University.

*Note: Cimarron County has the only settlement in the state that observes the Mountain Time Zone – Kenton.

How do you get to Cimmaron County?  It is a long drive from just about anywhere in Oklahoma as it is the westernmost county in the state, bordering Texas, Colorado and Kansas on the panhandle, but you can get there and to any county in Oklahoma in a vehicle from the Stuteville Automotive Group, with locations in Atoka, Durant and Tahlequah.