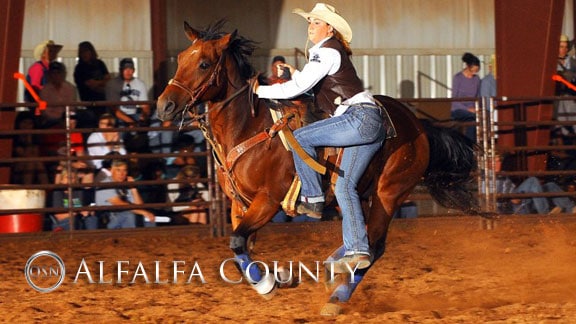 County seat: Cherokee
Population: 5,700
High schools (4): Aline-Cleo Cougars, Burlington Elks, Cherokee Chiefs, Timberlake Tigers
Universities: None
State championships:  There have been 17 state championships taken by Alfalfa County schools, 15 of them won by Cherokee, including nine state titles won by the boys track team and most recently in 2014.  Timberlake won in Class C football in 2009 and Burlington brought home the county’s first title in 1936 in Class B boys basketball.  The Burlington girls basketball team made the state quarterfinals in 2014 and the boys made the quarterfinals in 2011, 2012 and 2013.

• Harold Keith: Born in Lambert, Oklahoma Territory (in what would be Alfalfa County); ran marathons and steeplechase; Sports Publicity Director at the University of Oklahoma, 1930-1969; founded the College Sports Information Directors organization; author

• 2013 Class C football state championship
Cherokee won its second state title in football in four seasons and did so by going unscathed through 12 games and beating the defending champion.  The Chiefs won a battle of unbeatens with Tipton, 38-14.  Junior quarterback Tanner Bowman rushed for 112 yards and three touchdowns, while running in the two-point conversion on all three scores.  Senior running back Tanner Ducotey rushed for 275 yards and two touchdowns.  With a championship, the Cherokee Chiefs capped a year in which they didn’t allow a point scored against them in the regular season.

How do you get to Alfalfa County?  It’s in the northwest quadrant of Oklahoma on the Kansas border and you can get to any county in Oklahoma in a vehicle from the Stuteville Automotive Group, with locations in Atoka, Durant and Tahlequah.