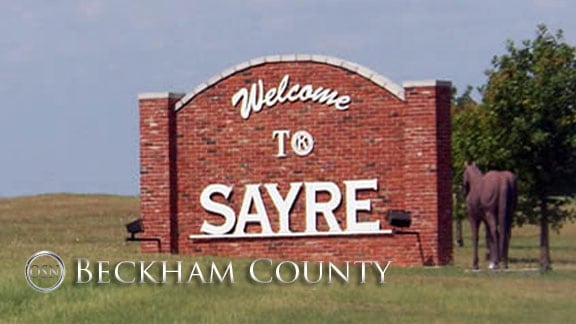 County seat: Sayre
Population: 24,000
High schools (5): Elk City Big Elks, Erick Bearcats, Merritt Oilers, Sayre Eagles, Sweetwater Bulldogs
Universities: Southwestern Oklahoma State University Sayre Campus
State championships (31):  Elk City has earned more than 70 percent of the county’s state titles with 22, spread out over nine sports. Sayre’s lone football championship was the first football title for the county and it was won in 1950. The first ever state championship was won by New Liberty (now closed) in boys basketball in 1937. Erick has a couple of girls basketball titles, 26 years apart – 1977, 2013 – and combined with Sweetwater for a boys basketball championship in 2001 in between.  Merritt also won two in girls hoops in 1978 and 1980. 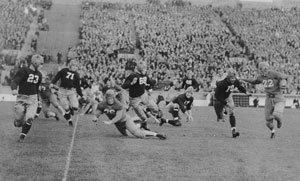 • Raymond Mallouf: Football player – Sayre High School (Class of 1937) All-State, ran for six touchdowns and threw for three more in one game; Southern Methodist University, 1940 Southwest Conference champions; NFL drafted by Chicago Cardinals, played one season, then served in WWII, came back to play for Cardinals and led them to NFL title game, played one additional season with N.Y. Giants, first quarterback in NFL history to achieve a perfect passer rating of 158.3 in a single game.

• “Believe In Me” (2006)
The movie based on the book written by Harold Keith, was loosely based on the Sayre girls basketball team.

• 2013 Class B Girls Basketball State Championship
Erick defeated Lomega, 56-53, in double overtime.  The Bearcats saw an eight-point fourth quarter lead evaporate and trailed by five with less than a minute left.  Then, down by three in the closing seconds of regulation, Maranda Janz hit a long three-pointer to tie and send the game to OT.  In the second overtime, Makenzie Janz hit a basket and subsequent free throw to give her team its ultimate three-point lead.

Merritt had beaten Duke twice in the season, but needed to rally in the final minute to come away with a 40-38 victory in the championship game and the Oilers won their second title in three years.  Paula Carpenter had a game-high 24 points, including the final five for the win.

Sayre is also the home of the Sayre Street Races, with drag races in town in the spring and summer.  Plans are underway to build a new Drag Strip Park on old Route 66.

How do you get to Beckham County?  It is right in the middle of the state vertically and on the western Texas border (halfway in between Oklahoma City and Amarillo on Route 66), and you can get to any county in Oklahoma in a vehicle from the Stuteville Automotive Group, with locations in Atoka, Durant and Tahlequah.