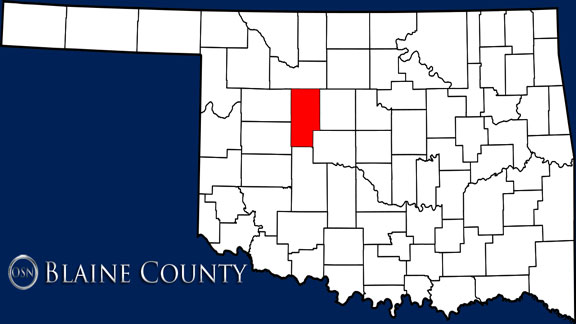 County seat: Watonga
Population: 9,700
High schools (4): Canton Tigers, Geary Bison, Okeene Whippets, Watonga Eagles
Universities: None
State championships (45): Watonga leads the way in the county with 32 titles, 19 of those were taken in girls track (11) and boys track (8). The county’s first championship came in 1948 when Watonga earned one in football.  Okeene has 10 championships, including four in girls track in five years from 2004-2008. Canton has a title in girls track in 1974 and 25 years later in girls cross country.  Geary’s lone title came in wrestling in 1979.

• 1997 Class 2A football playoffs
Watonga has six football titles, with the most recent coming in 1994.  In 1997, the Eagles were the state runners-up and along the way got a little revenge from a previous year.  Frederick had won state titles in a row and had dismissed Watonga from the playoffs the year before.  The Eagles stopped that streak with a 42-27 win in the state quarterfinals

• 2009-2012 boys basketball
Watonga had three straight trips to the state tournament, which included four players who were close family: Javis Flynn and E.J. Tillinger, step-brothers, Jaylen Flynn, a first cousin and Nick Fowler, another first cousin.  Keeping it in the family worked for them.

• 2009 Class A football
Okeene was no stranger to tough games, having won titles in 2006 and 2007. In late September 2009, Okeene hosted Texhoma and trailed 27-0 at the half.  The Whippets scored 27 points in the second half, forcing an extra session.  Three, actually.  Okeene eventually defeated Texhoma, 43-40, in triple overtime for the district win.

How do you get to Blaine County?  It is in the northwest quadrant of the state and its county seat Watonga is approximately 70 miles northwest of OKC, and you can get to any county in Oklahoma in a vehicle from the Stuteville Automotive Group, with locations in Atoka, Durant and Tahlequah.