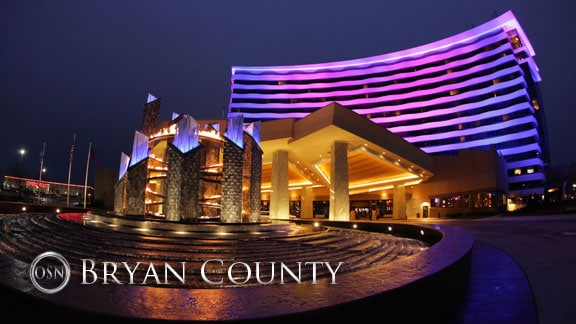 County seat: Durant
Population: 44,000
High schools (9): Achille Eagles, Bennington Bears, Caddo Bruins, Calera Bulldogs, Colbert Leopards, Durant Lions, Rock Creek Mustangs, Silo Rebels, Victory Life Eagles
Universities: Southeastern Oklahoma State University Savage Storm
State championships (34): Silo leads the county with 11 championships, winning 10 in fall and spring baseball since 2002. The Rebels also won a girls basketball title in 1999. Rock Creek consolidated Bokchito and Blue schools in 1991 and has eight championships since. Bokchito earned two in baseball just before the merger in 1988 and 1990. Colbert has five championships, one in boys basketball and four in girls basketball with three coming in 1976, 77, 79. Achille won its lone title in boys basketball in 1949 and Calera did the same in boys basketball in 1956, each in Class B. Caddo’s only title didn’t come until 2011 in Class B football.

• 2002 Class A Baseball State Championship
Silo pitcher Colby Oller threw a five-hit shutout against county rival Rock Creek in the championship game and the Rebels won, 7-0. The irony was that Oller was a star pitcher for the Mustangs two years earlier and had won a state title with Rock Creek as well.  That may have started some animosity between the two schools and it has continued over the years between the two small school baseball powerhouses.

• 2006 Class 5A Boys Basketball State Quarterfinals
Durant was an underdog to John Marshall, but found a way to defeat the Bears in the first round of the state tournament. It just took four overtimes to get it done. Durant finally came away with a 74-72 win after 48 minutes of basketball had been played. Will Robinson made the game-winning shot with two seconds left. Justin Stephens had 26 points.

• 1984 Girls Basketball State Tournaments – Class 4A and 2A
Joell Wiley broke a 13-year-old record for scoring the state tournament. She scored 53 points in a loss to Southeast in the quarterfinal. The record lasted only one day as it was broken against the same Southeast team.
Colbert girls won their fourth state title in nine years that same March. The Lady Leopards went 28-0 and Bettina Turner scored 49 points in the semifinal against Savanna. Turner had a three-game total of 124 points through the tournament, finishing with the third most points in state tournament history.

How do you get to Bryan County?  It is in the southeast quadrant of the state on the Texas border, and you can get to any county in Oklahoma in a vehicle from the Stuteville Automotive Group, with locations in Atoka, Durant and Tahlequah. When you’re in Durant, stop by their location at 851 Westside Drive.