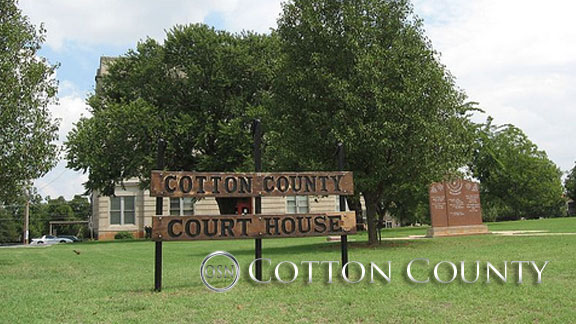 County seat: Walters
Population: 6,200
High schools (3): Big Pasture Rangers, Temple Tigers, Walters Blue Devils
Universities: None
State championships (4): There are only four titles to talk about in the county. Temple has one in boys track in 1970 and one in football in 1989. Walters has one in boys golf in 2000 and boys track in 2002. Additionally, outside of the OSSAA, Temple just won state in powerlifting again.

• Abe Lemons: Played basketball at Walters (Class of 1941); After WWII, played at Hardin College and then at Oklahoma City University; Coached at OCU from 1955-1973, when it was an NCAA school and took the then-Chiefs to the NCAA Tournament seven times and NIT twice, also coached at Texas-Pan American and at the University of Texas (1976-82), where he won an NIT championship; Coached again at OCU from 1983-1990, and finished his career with 592 wins.

• John “Pepper” Martin: Born in Temple. Played baseball and debuted with St. Louis Cardinals in 1928 when he was 24. Won World Series titles with St. Louis in 1931 and 1934 and was a four-time All-Star. His batting average of .418 in the Series is still a record.

• The lone football championship for the county came in 1989 when Temple tore through the Class C playoffs, outscoring its opponents by an average score of 42.8-5.0. The Tigers had been beaten in the state semifinal in ’87 and in the final in ’88 before finally getting to the top of the mountain. Darren Hartman rushed for 155 yards and three touchdowns in the win.

How do you get to Cotton County?  It is in the southwest quadrant of the state, located on the Red River, and you can get there and to any county in Oklahoma in a vehicle from the Stuteville Automotive Group, with locations in Atoka, Durant and Tahlequah.