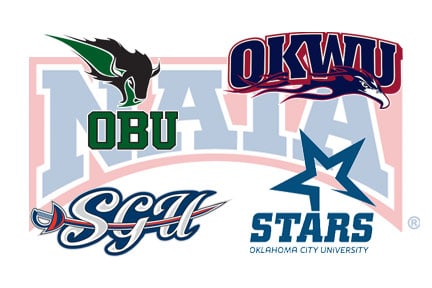 With the latest rankings released on Tuesday, Oklahoma teams continue to climb in the polls.  Some to new heights.

The Oklahoma Baptist Bison are atop the latest NAIA baseball poll.  It’s the first No. 1 ranking for OBU in baseball.

“Anytime you accomplish something at a program for the first time, it’s special,” said associate head coach Chris Klimas. “It means a lot to the guys who wore the Bison uniform in the past.”

Oklahoma Wesleyan (35-6) continues to climb as well, moving up two spots to No. 9.

On the softball diamond, St. Gregory’s has started a new winning streak, which is now up to seven after wins against USAO.  SGU also had a 20-game winning streak earlier and the Cavs (35-5) moved up one spot in this week’s poll to No. 4.

Oklahoma City has also put together a 20-plus winning streak this season.  The Stars (32-8) are 7-7 following 21 straight wins and fell one spot to No. 9, but are the last team to have notched a win over SGU.