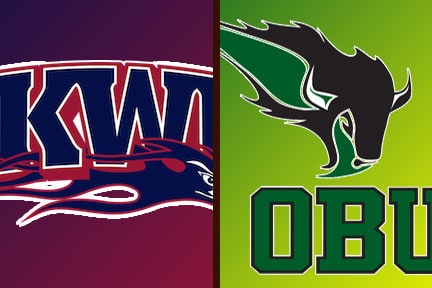 Will Price got his first hit of the game in the 11th inning, and it was one OKWU baseball fans will talk about for years.

His double to left sent pinch runner John Davenport home and gave No. 3 Oklahoma Wesleyan a 4-3 win over No. 1 Oklahoma Baptist in the 2014 Avista NAIA Baseball World Series.

OKWU (58-7) played in its third consecutive game that went to extra innings.  The Eagles next face either Cumberland (Tenn.) or Lewis-Clark State (Idaho) in the tournament.

Oklahoma Wesleyan had many story lines from which to choose when considering what to celebrate.  The Eagles avenged an earlier loss to the Bison when they fell 2-1 on a Matt Page walk off home run.  Also, OKWU took down the No. 1 team in the country.

“First and foremost, it’s a world series win,” Parker said.  “Obviously those are extremely hard to come by.  It’s hard to even get here and we’re fortunate enough to do that, so the opportunity to keep playing a little longer for our seniors and our school and all of that is the main thing.”

And Parker was clear in the way he and his team look at the team opposite them this evening.

“We have tremendous respect for Oklahoma Baptist for Coach Cox and they run their program and the way they go about it,” Parker said.

“The way he’s help me since I’ve been at Oklahoma Wesleyan, I can’t say enough good things about Coach Cox and their program.

“To be honest with you, I’d have rather played them in a national title game and to have played them to a draw, I guess, than anything because of the respect we have for their program.  Coach Cox is such a class act and their guys are the same way.”

The Eagles went up 2-0 early when Jose Ruiz launched his 14th home run of the season over the left field fence.

OBU’s Steven Knudson countered with a solo homer in the third, his 15th of the year.

In the fifth, the Bison claimed the lead with a two-RBI single by Ivan Vela.  The 3-2 advantage would hold until the ninth inning.

Trae Bobo reached base on a walk and advanced to second through a Jinny Parra balk.  The Bison brought in ace Julian Merryweather, but Garret Easton was able to line the ball down the left field line and Gunner Joyce, running for Bobo, made it home.

“It was a good swing by (Easton),” Parker said.  “Our guys have been that tough, gritty group all year and not that anybody is surprised that it’s a tough gritty performance again.  Trae Bobo had to get on base first and then we got a balk out of the deal.

Sam Haynes came on in relief of Diego Ibarra.  His performance in the ninth, 10th and 11th innings produced three up and three down in three consecutive innings.  The Bison bats were shut down.

In the top of the 11th, Cody Riley led off the inning with a single.  And then Price made his mark in Eagle baseball lore.

“We had been working all day and we missed a lot of balls,” Parker said.  “Jinny Parra, their starter, did a tremendous job of keeping us off balance and missed a lot on fly balls and weak outs.

“We didn’t make adjustments early enough and Will got to the top of that ball and hit it like a rocket into right center and John Davenport, who was pinch running for Cody Riley, was able to score from first.”

The next game for the Eagles in the world series is set for 8:30 p.m. CDT.